I tend to enjoy games in which the Main Character (MC) can become powerful during the story. I like seeing progression in their journeys and it feels satisfying to watch them grow. In Superheroes Suck, the MC starts out with an incredibly mundane and predictable life until something very unexpected happens. His life is pretty much uprooted and he gets brought to an academy for superheroes. So the MC starts as a nobody, and from the looks of things will become a powerful superhero in future updates.

Once the MC arrives at the academy, the game gets opened into a traditional sandbox style game. Before you switch off this page and look for another game that isn’t a sandbox, bear with me. In general, I loathe sandbox games because most are done in a grindy and repetitive way. Fortunately in the case of Superheroes Suck, the sandbox is done pretty well.

The current size of the sandbox is very manageable and there are only a handful of places that you can access. It makes finding all the events rather simplistic and I much prefer this way over having to search all over the place to find people. On top of this, there are useful tips telling you how to progress the story with each character you meet and it also notifies you when you reach the end of the content for your current version so you don’t waste your time. As I stated, I really dislike typical sandbox games but in spite of that I was able to enjoy this one due to all the features they added to assist the player.

There is a “grind“, per se, but I think it isn’t terrible. You can gain some stats: confidence, aptitude, and fitness but a lot of times the events are tied to these training sessions so it’s not as repetitive as you may think. If you’re asking me whether I would prefer it to be purely a visual novel or a sandbox, hands down a visual novel, but I think this game and story are worth the extra effort by the player that the sandbox requires. It’s clear the developer spent a lot of time to make the sandbox as accessible and painless as possible so all things considered, I would say the production level of the game was about average.

The game introduces you to a decent selection of love interests. They all have drastically differing appearances and for the most part have distinctive personalities. All of them also have unique superpowers as well. I’d say the game offers at least one or more characters you would find appealing. Personally, I liked all the love interests and the game does a good job of providing an assortment of charming girls you can pursue. Early on in the story, the girls are assigned to be your tutor for all the different subjects in the academy so you get to spend lots of one-on-one time with them. As they get more comfortable around you, they open up and allow you to get to know them.

I often find with sandbox games that it is difficult to feel immersed in the story but that wasn’t the case with Superheroes Suck. The game does a fairly good job of making the relationships feel personal (even the platonic ones as well). I believe part of the reason why some of the relationships feel natural is partially because every Sunday there is a class in the academy where you get to see all the characters interacting together. These days add a nice contrast to the solo events. On top of this, the game also introduces a patrol in the latest update. The patrols are where all the superheroes/heroines go out into the city in groups to keep an eye out for any nefarious activities while in the mean time, introducing themselves to civilians. I imagine this will often be where you get to see all the heroes/heroines using their powers and fighting villains in the future updates which, once again, is a nice way to contrast the constant training sessions.

All praise aside, I do feel the game’s pacing is off. The progression seems to be faster than I would like to see from a story-based game. I think that it would benefit greatly from adding some more relationship-building events early on in the game. I think you form bonds with some of the girls too quickly and it takes away from what otherwise would be the start to some great romance arcs. I would have appreciated seeing more from all of the cast earlier in the game, even the characters that aren’t love interests. I think the headmaster lady that introduces you to the academy is only shown during the classes on Sunday and a few times before the patrol. She was a very interesting character and the dialogue and advice she provides was really great. Seeing her, as well as the other characters, more often would really add more flavor to the story. All that being said, barring the aforementioned issues with character development, the story and the writing are pretty decent but nothing extraordinary. I hope in the future, the story will really ramp up and be fascinating considering all the potential the plot has.

As of the current update, there is a good amount of content with all the girls. The main story has quite a few interesting and well thought out events available at this time as well. There have been many sexual encounters with the love interests and it becomes apparent that the scenes aren’t the game’s strong suit. The animations are decent but the scenes in general lack a lot of context and feel rushed. There really is only an animation or two per scene and it really feels lackluster. The game could use a lot of work on the scenes. The girls look really good so it’s very disappointing not being able to enjoy the lewd scenes. I think it’s obvious that the visuals are just not up to par with contemporary adult games, although I do really enjoy the models that the developer chose. The framework for really good scenes is already built so, along with just about every other aspect of the game, it has great potential.

Currently, the game is held back by the problems I have explained above and I think it’s safe to say the game is pretty average. I think it’s clear that the plot, the setting, and even the characters are pretty interesting so I think the game will improve once it is allowed to expand upon these parts further. I would say the game is still in its early stages but I think the game has a bright future if the developer puts in the time to fixes the problems that currently plague this otherwise enjoyable game.

I would recommend giving it a try in perhaps half a year if you can stomach sandbox games. Hopefully, by then, many of the issues are resolved. If you feel inclined to try this game out, be sure to let us know your thoughts in the comments below. 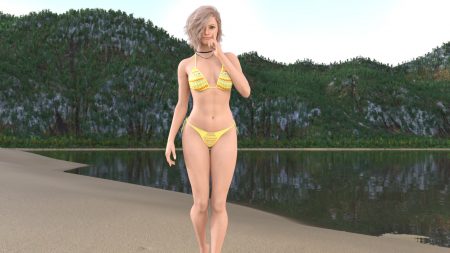 A Mother's Love Review: She Will Be Loved

Sounds like a maybe game It can be good as well as bad for me. I will give it a try in the future.