What a Legend! is developed by MagicNuts. This game follows the story of a young man that goes to the biggest city of the realm to lose his virginity but ends up meeting a mysterious woman who sends him on an epic quest. A quest that is full of sexual encounters, unhappy housewives, beautiful damsels, comely magical creatures, and the chance to become a legend.​ This is a pretty enjoyable game so far, and it serves what people expect of it very well, which is instrumental for the success of anything. And before we start the review, I want to give props to the developers for constantly interacting with their fans and keeping them updated about the progress of the game, every day, yes they update the progress graphic every day, you guys can check it out when you want to know progress it is on their Patreon.

Let’s talk about art first, I am very impressed with the art of this game and it is one of the strong points here if not the strongest. And out of all the games that feature 2d art, in my opinion, this game does it the best, this style of art is very attractive for the eyes what can I say. The backgrounds(environments) are very well designed and the overt attention to detail to them is admirable. And the time this game was set in is ancient, so getting things right according to that time can be a big task and take significant effort but the MagicNuts deliver, doesn’t matter if it is buildings or clothes or jewelry, they will be on point.

Now, coming to gameplay mechanics, at first, I thought it will be another free-roam mess but I was wrong. The gameplay is pretty well, the player has a clear idea of what to do, where to go, just by following the dialogue, and the last dialogue which practically tells u what to do is also highlighted, which is one small thing but is helpful and I want other games to implement it as well. And much praise for having that in-game hint system that is very detailed that the player doesn’t need a walkthrough or anything else to play the game, they can just look up in the hint system. The cut scenes are well done and the music was also fit nicely for those scenes.

Enough is enough can be used to describe the writing of WAL, to explain, this game does not go on crazy narratives or monologues trying to explain things and failing miserably like some, but they try to stick to point and even when we are listening to a back story or past life of a character, the writing is powered with, accompanied by, the right set of visuals which make storytelling flow pretty easily and make it look effortless. And the writing has 2 sides according to me, a fun side, where our MC is just funny and playful, the other side which is semi-serious, which is majorly seen during storytelling or when something significant is going on.

This is something to catch on for other developers too, like not trying way too hard and disappointing themselves, rather just do what is enough and make a fun story that has a good story and also makes the players laugh, feel good while playing. And we have versatile characters with us on board, whether it is fierce redhead holly or a perfect innocent princess Simmone, with a wide range of characters, WAL has something for every player, and to me personally, I don’t have a character that I don’t like, ok, maybe Celestina, but that is a story for another day. So, that’s about it in the story part, great job here too, there is certainly room for improvement in this section but what we have now also does the job.

So, overall, with this recent release, this has become one of my favorite games out there, and it is great to see when a game is becoming better and more enjoyable with each release. And, for people who have not tried this one yet, please do, this one is a must-play, and MagicNuts make their game available for free to the public after the 1-day early access to their supporters. I wish the best for developers and hope that this game only prevails with every release. 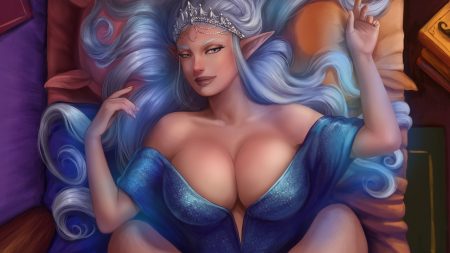 What A Legend! Review

Top Articles of the Month – September