Void’s Calling Episode 1 is the first installment by game developer Novel who previously released Twists of My Life. In Novel’s latest adventure you play Forlan, a “Pure One” – a sort of monster hunter in the vein of everyone’s favorite Butcher of Blaviken. Forlan finds himself in a new city where he spends his days and nights, well, hunting monsters and trying to get laid. It’s an overall enjoyable experience with some really high-quality 3d renders and some pretty good animations, but the game has its pitfalls. I don’t think Void’s Calling Episode 1 will be an instant classic in the genre by any stretch, but the developer has a lot of talent and an ambitious vision, and later additions to the game could change my mind. There’s seriously a ton of potential in this game and I’m excited to see what Novel has in store in the future.

Let’s get into the nitty-gritty of my review:

Traditional Sword and Sorcery is a great genre for a mature game that you surprisingly don’t see serious developers delve into all that much considering the success of shows like Game of Thrones and video games like the Wicher series or Skyrim. So I was happy to see Novel attempt a monster-hunting RPG adventure complete with magicians, damsels, and, of course, a smoky tavern. The overall story is interesting and the medieval city setting is fun, but I had trouble keeping up with the story and staying on task. It would take me a very long time to figure out I needed to go see someone at some specific place in the city, and I’d only figure it out because dozens of other folks in the Steam forums were asking the same thing.

I think it is probably a language barrier thing, honestly. It’s clear even from a quick read of the game’s own “About This Game” section on Steam that the developer’s first language isn’t English. Don’t get me wrong, though – whoever did the English language translations for the game (if it wasn’t the developer themselves) speaks excellent English. It’s just that in games like these with complex narratives and backstories you need a native speaker, or as close to one as you can get, in order to convey EXACTLY what the game and its characters are trying to say. It’s important and such a small thing considering all the time and effort that goes into all of the other aspects of game development.

What this game really needed in the story was an exposition character to explain the world and – a bumbling sidekick who stays attached to the MC’s hip all the time (for whatever reason), but who knows nothing about the monster hunting world Forlan comes from. He asks questions and the player gets answers. In turn, this exposition character could know the city like the back of his hand and provide some much-needed comic relief while keeping the story moving. Every Shrek needs a donkey.

The artwork in this game is really high quality. The girls are uniquely beautiful and it’s great when you take a break from monster hunting and one of them takes off their clothes and plays with your sword. The artwork isn’t just polished, but also artistic (good lighting, rule of thirds, etc.). There are also a ton of really ambitious renders in the game with really big crowds (like at the Saturday Afternoon Market). I can only see Novel improving as he advances in game development and 3d design. Is the artwork perfect? No, but it’s better than 80% of what I see out there, and when there are hundreds and hundreds of renders in the first episode of a game, it’s hard to expect perfection.

The actual gameplay is where Void’s Calling really stumbles for me, though. The novel set the game up as a free roam RPG set in a medieval city and its outskirts, but the character only has a really limited window of time where he can accomplish his goals before it’s time to head back to the inn and try in vain to seduce the innkeeper’s wife…again. On the best days you know what your goals are, but most of the time you’re just wandering around the map hoping to run into a monster so you can lumber through the repetitive, and frustratingly random, combat system. Chance and tedium are two things that consistently frustrated me. For instance, you are forced to get a room at the only inn in the city, but you have to pay for your room and board every day, so there’s no real choice there. Maybe give players the option to camp outside the city since they’ll be trudging out there half the game so that they can, as I said, hope to run into a monster to earn enough money to pay their rent. Chance and tedium.

But the developer was very ambitious in his vision for this game and Novel gets an A for effort in that regard. But that A drops down to a C because of the tedium and the difficulty to navigate the main story. There is also some “fork in the road” decision points in the game where it couldn’t be less obvious that you’re about to make a pivotal choice. I understand that’s a lot like real life, but real life is a pain in the ass. Games should be grounded by the gravitational pull of real life, but definitely not be crippled by them.

Overall I really can’t say that I’m not excited about Novel as a game developer after playing the first episode of Void’s Calling. AVN developers need vision, ambition, and passion, and you can all of that and more in Void’s Calling. Is there still a lot for Novel to learn and improve on? Definitely. Does Novel seem like the type of developer who listens to feedback and adapts to it? Well, on the forums it looks like that’s the case, but I’m going to dig into the recently released Episode 2 and let you know if that’s really so.

In the meantime, give Void’s Calling a try. You can find the first episode of Void’s Calling on Steam, and you can even get your hands on a bundle that includes the Novel’s other title: Twists Of My Life.

Have you played Void’s Calling? Please let us know how you feel about it in the comments and any suggestions will be appreciated. 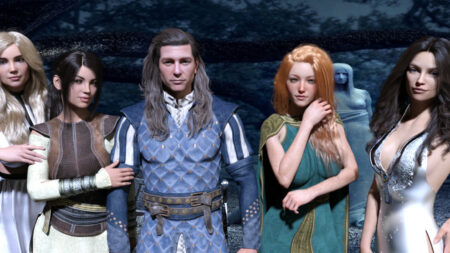 I'm about three months into beginning my hobby as a 3d artist. I'm mostly active on DeviantArt, but I'm trying to expand my horizons. I like making comics and meeting new friends to collaborate with.

Debauchery for me, and not for thee