This review is a follow-up to my previous review, my last review of Timestamps: Unconditional Love, the first chapter in the Timestamps universe, and didn’t really emphasize changes and improvements in chapter 2 of the game, so I was not very satisfied with that review and thought that it is better to write another review majorly focusing on chapter 2. So, this review will have much focus on chapter 2 of the game, its gameplay mechanics, visuals, and story, in terms of story, I think chapter 2 is better than chapter 1 and that’s mainly because of one character’s arc. In this installment of Timestamps: Lost Love, you are thrown back into the adventure. How much of the timeline has been messed with? You need to travel to an unknown time, to really understand the present. Crazy things are happening in town as of late, and now someone close to you is missing. So, let’s get into it.

The Renders and animations in this game are top-tier in terms of quality. The visuals have certainly gotten better than the previous chapter of the game. And we have many new characters and also new models for some characters as well because we travel back in time. We got younger models for Julia, heather, Candice and an older model for Veronika. The younger model for Julia is amazing, Candice’s was also pretty nice but I prefer her older, coming to heather, I like her better when she is older and is a MILF, Veronika looks great in both of the times, but the younger one is just a sex bomb. Another side character that looks amazing is ava, she is basically real-life Katrina jade, without the tattoos of course. We have many characters and the cast has gotten bigger, which means more scenes to the players, which is always a good thing if the developer can handle it, and it seems that MotKeys is able to handle it quite nicely. Overall, this game has really good visuals and animations have gotten better and better and they give you a fluid-like experience.

This is quite a long game. Lots of movement to various places on the map but this game certainly has a better navigation system than many sand-box/free-roam games do. We have a “Last choice” button, which is really useful to go back and is really handy. The transitions (even when going back too) between animation videos and stuff are really smooth. Players don’t really need a walkthrough for this game, but if we are stuck, we are provided with an in-game hint system which is really helpful for the players and is implemented pretty well in my opinion. We have a full scene replay in which you’re able to rewatch the scenes, which is super handy, rare, and is an incredible feature. The UI of this game really good, the developer has designed it pretty well. This game has one of the best gameplay systems out there.

In regards to the story, Timestamps does have an interesting story, especially the ones with an enthusiasm for time travel/sci-fi themes, who will find it a lot to their liking. The dynamics of the relationships between the love interests are also quite nice. Juliana’s storyline can be made more interesting and romantic, although I feel like I am judging early ’cause there’s a lot more to come, Heather’s storyline is getting a little intertwined, bacon is also coming into the picture, players were provided an option (I think a minor one) to share her with him or not, although since this will happen in future updates, maybe we will have to make the final choice then. Something that really stands out here is Veronika’s arc, the emotion and romance between her and MC is really engaging, she is hot as fuck and also has a relationship arc which I consider the best in this game, I really hope the developer continues to maintain her arc to be this good. Can’t wait to nail Lorraine (Juliana’s mom) lol. Well, that’s it for this part

Overall, Timestamps is a good game. Two things that are absolutely stand out are its visuals and Veronika’s arc. It is a game that you should try out. There is a lot of content already with chapters 1 and 2 combined, as much as some completed games have, so there is no need for hesitant feeling like hmm this might not have enough content as it is still in development. I hope Motkeys gets the support he needs to continue this game and all the best for the future for his team.

Have you played Timestamps? feel free to talk about the game in the comments. 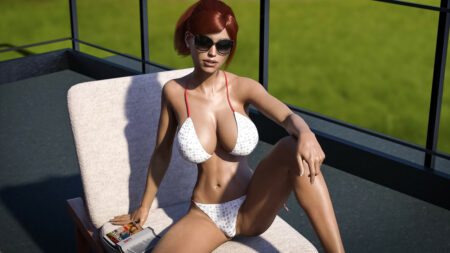 This is my favorite game! So much to love about both chapters. Really well Done!