The Grim Reaper who reaped my Heart! is an adult visual novel by acclaimed artist and animator Kamuo. Your life changes when a mysterious door appears in your apartment on what usually is an empty wall! To your surprise, Vel, an adorable reaper who loves games (and is a more than a bit clueless) has decided to pay you a visit!

The Grim Reaper who reaped my Heart! is truly a gift from the soft anime tiddy gods. Short, sweet, sexy, and to the point, this visual novel is the gift that never stops giving.

After getting over the fact that a mysterious door has randomly popped up in your apartment, you meet the irresistibly cute Vel, a clueless grim reaper who loves to play games.

It doesn’t take long before you discover she’s willing to accommodate your needs when she notices the tent you’re pitching, though only after asking what exactly a dick is in the first place!

Along the way you’ll also meet Neu, a fellow grim reaper and the self-proclaimed best friend of Vel, a fact that she loves to weave into the conversation no matter how many times the deadpan Vel denies her the validation she so desperately needs.

Like most visual novels written in English by those who aren’t native speakers, the prose occasionally sounds a little weird, but more often than not the writing is excellent and really serves to characterize both the clueless-yet-kind Vel and her starved-for-any-kind-of-attention friend and fellow reaper, Neu.

Vel’s story is one that I STRONGLY recommend you experience for yourself, so I hesitate to reveal too much of it to you in this review, as it is filled to the brim with humor, soft anime bodies, and more charm and sex appeal than you’ll know how to handle!

This game is a clear example of visual novels done well without having to stray from the core “read and click choice” mechanic.

The game allows you to hide the text box at will, and during lewd scenes allows you to watch or “enjoy” them on loop for as long as you need to before clicking to advanced to the next scene.

The Grim Reaper who reaped my Heart! is an example that all other short adult visual novels (or even just VNs in general) should learn from, when attempting to figure out how they want to handle not only their interface, but their artistic presentation as well.

Kamuo’s dedication to providing visually rich scenes is what elevates this, his first visual novel, to a level above most.

The sheer quality of the art that is packed into every scene in this game, whether it be its absolutely STUNNING lewd animated scenes, the clean and crisp character sprite design, or even the small touches of animation in many of the scenes where Vel can be seen playing her games, this game will have your eyes rolling back into your head in pure pleasure!

And we haven’t even mentioned the sound design yet. Oh, the sound design! During the lewd scenes, Vel’s soft moans are accompanied by an excellent range of erotically wet, well-placed sound effects.

The game’s background music, while charmingly anime, is never distracting and helps significantly in setting the stage for the game’s overall humorous and welcoming tone.

Overall, The Grim Reaper who reaped my Heart! is a joy to experience.

Kamuo’s love for his characters shines through brightly in this highly recommended work.

Have you played The Grim Reaper who reaped my Heart!? Let us know what your thoughts are in the comments, and be sure to join the LewdPixels Discord! 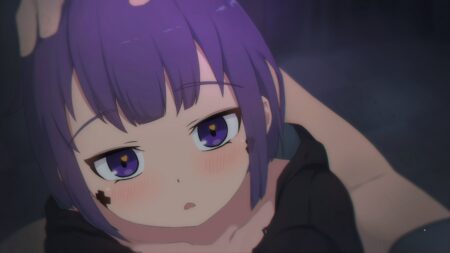 The Grim Reaper who reaped my Heart! Review

Come Home works its way to a steam release

Staff Pick of the Week - My Girlfriend's Friends