What would you do if you could explore the unending void that is space? Well, this game doesn’t let you figure that out, but you do get to see how Camran deals with it. The game does start off with a dark scene that before fading into black and into the title, gives us a glimpse into the dark universe the game is set in, so do keep in mind that the game can deal with some heavy stuff every once in a while.

Tales from The Unending Void stars Camran August Valenmann de Lonval. He is the main character. You can change his first name (though you’re stuck with the rest of it, and some scenes where his initials are mentioned might not make sense if you do change it), who is as the story puts it “…from a long line of galactic nobility”. This is a title that instead of making him powerful or helping him through the story might actually be an obstacle for all we know. We’re not talking about an overpowered MC.

Camran has two sisters which yes, you can potentially romance (the current version doesn’t let you do much, but you can start developing relationships for future chapters, you just won’t see the results in the current update), the first one is Eva (pictured left), she is the “nice one”, the one everyone likes and as the games describes her “open and understanding”. We then have Lilly, who is the polar opposite of Eva (pictured right). The opposite-theme actually works on multiple levels; for example, she is a redhead while Eva has blonde hair. But the differences go further, and as the game lovingly puts it, Lilly is the bitchy one; she also has a “meaner stare”, that looks like she is constantly judging you (and maybe she is), compared to Eva who has a softer gaze more “caring” if you will. Do not fret if you like Lilly though as she does have character development throughout the course of the story (as all good characters do), and you might end up actually liking her personality.

Another character you meet fairly early into the story is Céline. She is set up to be the girlfriend-kind of character right off the bat, but you can just as well ignore her completely and go for your sisters or any other family member you may meet. There’s a lot of characters that aren’t mentioned here and that is to keep the surprise. The way you’ll meet some characters is important to the story, just as who they are. Just know that there’s a very colourful cast and that at least one will strike your fancy, unless you’re into plants (and I’m not judging, but you won’t find that here, at least in this version). Adding to the atmosphere of the game, there’s also music, the game has more than 60 music tracks in total that you hear in the story which appear to heighten tense or emotional moments; whatever the story needs, there’s a song in the game ready.

“…the game has more than 60 music tracks in total…”

You’ll be happy to know (at least depending on your preferences), that there are other male characters in the game that you’ll meet and that populate the world, though of course the female characters outnumber that of their male counterparts by a lot in true Adult VN fashion. Now, for all of you sex scene speedrunners out there (because that’s why you would try to get to it fast, right?), the first sex scene is pretty early into the story, but you’ll have to pick the right options for that one.

The game has a lot of planets and different parts of the galaxy that you will explore throughout the story and they’re all unique compared to each other, which makes every place feel different: you’ll find a planet that is mostly uninhabited, one that has a cyberpunk looking city, and all kinds of different places. However, the place where you will spend most of the time, the ship, looks pretty bland, it doesn’t really have any features that make it stand out. It’s supposed to be a cargo ship, but that doesn’t mean it has to be boring; one of the most memorable spaceships of all time, the Millennium Falcon, is also a cargo ship.

On the subject of visuals, the UI is very clean, but also a little flat. I might have dropped out of Graphic Design, but I doubt any of my old teachers would be very pleased by that title card. This isn’t to say that the UI is ugly though, god knows that being flat but consistent is better than the alternative, specially when it comes to the UI. The graphics are also very carefully posed, I’m not going to say that there’s no clipping, because it is there, but you have to be looking for it to see it. Each character also has different costumes throughout the story, so you wont be seeing the same clothes every time you look at a character. Although, whether you like the visuals or not depends on how you feel about Daz3D graphics, since that is where the graphics are made.

This game is a straight up Visual Novel, and what I mean by that is that the gameplay consists purely of making choices, there’s no grinding, no open-world, and most of the choices you’ll be making are whether you want to see a scene or want to pursue a certain girl or not. You can also get all the girls in the same playthrough (at least in this version there’s no consequences for pursuing all of the characters), it is only on specific scenes where you cannot see all of the variants the scene has. Maybe further down the road the game will make you choose a girl, but for right now, you get to have your cake and eat it as well.

On the topic of gameplay, the game has a scene gallery, so you get to replay some scenes if you want. There’s also a relationship tracker enabled if you want it on the top right corner that tells you whether you have a relationship with a certain character or not. Tales from the Unending Void also has a codex screen that contains more lore that gets updated throughout the story as you encounter people and specific story elements that expands what lore you learn on the game. I’ve got to mention however, that even if this is a Sci-Fi game, the only way the amount of creampies you can get is possible without any consequences (if you choose that option every time), is with magic, I will not believe any other explanation.

Overall the game is really good, especially if you enjoy space travel and Sci-Fi stories. The sheer amount of lore in the codex as well (content not everyone is going to even read), is incredibly thorough, for example: you have locations in coordinates, you have entries for every character, there’s even entries for every one of the species you meet. If you like a game with a lot of lore, and a developer that is thorough with said lore, you’ll definitely enjoy this one. 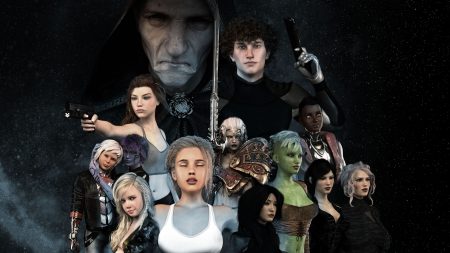 Tales From The Unending Void Review

I really like Tales from the Unending Void. So much so that I became and patron. You’ve got to support what you like.