Superhuman by Weird World is an otherworldly tale about shapeshifting monsters, power wielding humans, mysterious underworlds and a once normal college student stuck in the middle of it all. It offers a rather seldom seen art style, a vast breadth of content and a story that combines hilarity, mystery, horror, action and maybe even love (or just plain old sex).

The protagonist of Superhuman is a normal college freshman that is excited to find out what this new school world will hold for him. He’s rather inconspicuous and not the biggest star of any party. At one such, party he meets a girl called Ella and after a rather uncomfortable romantic meeting in an adjacent park at night, he finds out not only has his opinion of her changed, but his body as well. After seemingly being injected with an unknown substance and meeting two horrifying creatures he finds out that he is now capable of superhuman feats. He can shapeshift by turning into other people and animals or by extending his extremities, forming new tentacles and weapons or hardening his skin. Equipped with this newfound power he is dragged right into a whirlwind of struggle and a mysterious underworld filled with power-hungry humans, otherworldly monsters and other people that seem to have similar, yet slightly different powers than him. The protagonist’s once peaceful college life is now filled with danger, horror, action and still a lot of sex. Will he be able to find out what made him the way he is now? Will he be able to master his powers and defeat anyone that guns for his life?

The story of Superhuman is vast, featuring a wide selection of characters and different moments. Sometimes it dips into genuine horror showing terrifying monsters, sometimes it feels like an action-packed superhero movie, other times it shows a scared kid trying to figure out the world and sometimes it also features moments of wholesome friendships and later on even love. As of now the game is more than 8 big updates into its development and has enough content to satisfy most players. The writing is sharp and realistic even if it deals with monsters and shapeshifting. Just like any good B or monster movie it features a satisfying amount of camp and edge without ever getting too schlocky or dropping in genuine quality. Whether it deals with monsters, sex-crazed teenagers, drug trafficking mobsters or power-hungry politicians, the game manages to offer intrigue, mystery and genuine excitement. The main story always keeps on track and is nicely paced.

When it comes to its visual aspects Superhuman is probably one of the most interesting games on the western market. Deviating from the typical 3D style of programs like Daz, it features hand drawn characters that borders somewhere on the corner between edgy childlike musclemen and M.C. Esher inspired otherworldly monsters. The main character pretty much looks like a school shooter and during their first impression a lot of players might find the game’s style to be a bit crass. After playing the game for a couple of games however I found myself charmed by the creativity displayed here. The edgy character design, overblown body proportions and weird designs fit perfectly into a story about shapeshifting monsters, aliens and otherworldly fights. It never seems like the crude style has been brought forth by an inability of the artist to encapsulate a more realistic style but rather by them wanting to underline the game’s world and story. If you are not afraid to try out something different or even want to take a break from the typical 3D depictions found so often in Adult Games, the art style of Superhuman might be one of the most interesting deviations you can find.

In terms of gameplay the game features mostly standard Visual Novel choices that range from heavily impacting the story to just changing what kind of (sex) scenes you can see. While the game features a nicely paced and streamlined main story the player gets to select what their character does every morning, leading to a satisfying selection of side scenes where you can either indulge in your sexual desires, get to know some characters a little better or learn more about the world. Nothing ever feels wasted or unnecessary. The game features an impressive list of sex scenes that can be viewed in the Replay Gallery whenever you want after you unlock them. Those scenes feature a nice selection of different fetishes that might not be seen in other games, such as gender bending, body morphing, tentacle porn and more. There are also a couple of NTR scenes which are fully optional. These sex scenes just like the rest of the game do not feature animations, but they are also not needed as the developer keeps the figures from seeming stiff, masquerading a certain fluidity in motion. Superhuman features a full soundtrack and accentuating sound effects that often times greatly underline the more action packed or horror influenced scenes of the game.

Superhuman is a game that deserves more attention. As a story it brims with intrigue, mystery, horror and action, focusing on a world that seems eerily familiar yet unknown to us. Showing great restrain and pacing the story never stretches out too thin but still manages to incorporate several themes that range from a kid suddenly finding out he has superpowers to his meetings with friends, him finding love or him beating up grotesque monsters in some poorly lit alleyway. In every corner of Superhuman you can feel the love and passion that goes into such a product and I am excited to see what the future will hold for it. 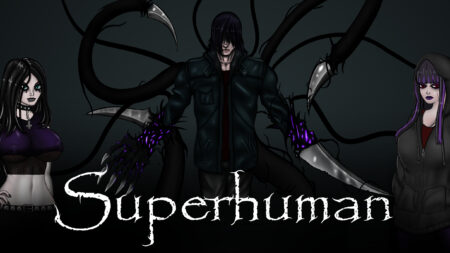 Tales From The Unending Void warps onto Steam