In Sorcerer, you take the role of a successful specialist courier who finds himself balls deep in a hidden world of magic and danger. It’s a premise and story that fits my tastes very well, and I can honestly say that I look forward to updates.

The reason I like the game is the characters and story. The MC in this game is vastly different from most MCs in games I’ve played. He’s a strong character with some depth and a few quirks. There are several characters in this game that are unique in my experience of adult games, and that makes them compelling. The world of Sorcerer, and the people in it, are well crafted.

The game itself, on the other hand is… Not.

The use of pauses to build a cinematic scene structure is annoying. These scenes, and they are overly frequent, take control and break rollback. If you try to roll back to see a scene you may have missed via a distraction, you get to see the entire “animation” again. Yeah. Not a good gameplay experience, and definitely not a good way to show action sequences. While I understand that it’s difficult to find the right way to show motion and animation while trying to reduce the time spent rendering, any method that takes away control is doomed to annoy. This breaks the experience for me and makes it so I can’t sit through a long session playing the game because I get closer to wanting to have nothing to do with the it every time one of these scenes occur.

On the positive side of the gameplay, there are different paths to choose on occasion that lead you on some interesting tangents, and while they can make you miss content, they also let you tell your own story without feeling like you’ll mess up the ending.

The art in general feels stilted. It’s like identikit art. All the bits individually look good and are nicely lit, but there’s little variance. As an example, when a person is seen walking up to the MC’s desk, the pose never changes for that person, only the position. It’s like they’re rolling forward on hidden wheels and not actually walking. It’s something that is easily fixed, but it just shows a lack of attention to detail.

Having said all of that, and knowing that I like the game, I still can’t in all honesty rate it any higher than I have. The story is good enough (at least for me) to look beyond these issues; it’s deep, entertaining, and full of memorable characters, but I can’t help but think that with some more attention to detail in the art and with a better method of showing action, these characters would be showcased in a way that they deserve.

So yes, the story is worth reading, but is it truly a game worth playing? If you can overlook the issues, then yes, but if you’re looking for the whole package from a game, then maybe hope for a remaster and code overhaul.

What do you think? Do you disagree? Let me know in the comments! 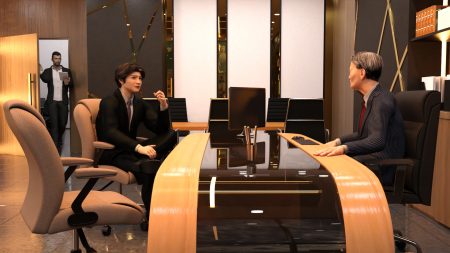 Building your own Android: A Ren’Py Howto

First Part of Subverse Has a Release Date

Agree with you about the gameplay issues and some of the writing throughout the game was off a little bit, but the story itself made up for it. Overall the game was quite enjoyable and I’m looking forward to future updates.

Thanks for the recommendation!