Something To Write About: The Author is the first in an ambitious series of games with the STWA prefix planned by STWAdev. That level of planning is rare in my experience of this industry, especially with so many games abandoned or rebooted several times, so the question is; is the game worth the effort already put into the planning?

In the game you play the role of an author who was published at a young age, but due to a few events in his life, he hasn’t been writing. The story starts with a random encounter, and then delves into the MC’s life, his past, and his relationships, both new and old.

The story itself is decent with some good moments, but the quality of the writing really isn’t up to scratch for a story about an author. While there are few typos, the big flaw in the text of the game is that there’s a lot of missed or incorrect punctuation. Sentences that should be separated don’t even have a comma, let alone a full stop (period to those across the pond). That really brings the readability of the story down, and interrupts both flow and immersion while the player tries to fill in the missing parts.

The art is nice, and above average in that I didn’t notice too many clipping or odd lighting issues. The character designs are shapely without being extreme, and while the art sometimes exaggerates expressions to the point of being comical, it’s easy to overlook that minor gripe.

Once you get into the game, the characters emerge as the true strength of the story. They have definite personalities, depth, and their own personal histories. This makes them seem much more alive and relatable. It’s easy to get invested in their stories and then look forward to the next episode, and makes the game playable enough to push through the readability flaws.

Overall, the game is a good experience, and one that makes me look forward to what STWAdev does with this series, and how the various other parts fit together. I recommend this game, and it really deserves a higher score, but I just can’t overlook the glaring and frequent grammar issues. If they were fixed, the writing would get a 3.5 as well.

Have you played the game? Disagree with my review? Feel free to join us and write your own review, or discuss in comments! 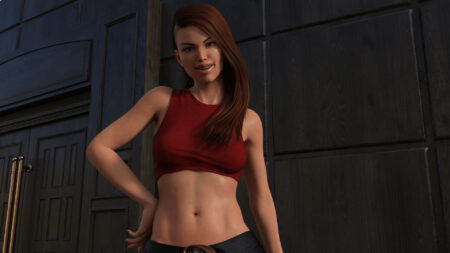 Something To Write About: The Author Review

Hillside - An Exploration into the Cost of Beauty?