When first starting SexNote, I initially enjoyed what was on offer. But I soon found the game wanting in certain aspects. A lot of the art is great but lacks polish, the story is decent but plain and gameplay could use a bit of tweaking. SexNote is being developed by the 2-person team JamLiz.

The game starts off with the titular Sex Note quite literally falling into the hands of our MC. We meet a few other characters, including our mom and step-mom (you can both rename and set a different relation to them). We also meet Brixxida a ‘shinigami’ that resides within the Sex Note. She exposits that magic in the world is running out, and you are the chosen one to restore that magic. Obviously, the best way to restore that magic is to have sex. A lot. With as many women as possible. In order to accomplish this momentous task, the Sex Note has granted you certain magic spells to use.

The general premise isn’t too original, but can be interesting enough to support the rest of the game. As long as the dialog is good, the plot is fine. However, the general writing feels average and doesn’t do much to stand out. Perhaps a dedicated writer might help in this regard.

As characters go—most of the original cast are fine, but not one person stands out from the rest. All of them are different, yes. But none of them are special. Which brings me to another issue.

All the female characters have breast sizes—in relation to their body size—ranging from large to hilariously large. I, too, enjoy a large bosom, but there comes a time when it’s just a bit too much.

I feel that a larger range of body types would be a major improvement. There’s more to a character than just their body, and if all their body types look the same, it doesn’t set them apart from the rest of the cast.

In a nutshell, SexNote is a sandbox dating-sim and that should broadly inform you of what to expect. There are however a few additional features here to talk about. As I previously hinted at, there are spells which you can use to accomplish certain things. There are four spells currently—Two of them work passively and work without your intervention, one works during dialog choices, and the last one is fully active and can be used almost anywhere.

Another mechanic that the game has is the mana meter. In order to use or upgrade your spells, you need mana and there are a few ways of acquiring it. Primarily, using your active spell will allow you to see the hidden magic realm. In this realm, you can click on the glowing orbs to replenish your mana. Secondarily, interacting (either dialog or sex) with the female characters or by asking the Shinigami for mana (again, through sex).

I feel that the biggest issue here is how underutilised the magic system is. One of the spells allows you to manipulate through speech (i.e. through dialog options) but opportunities to use it happened so rarely that I forgot it was even a thing. Either more depth needs to be added to the current pool of spells or more varied and active spells need to be implemented.

In terms of dating-sim mechanics, there’s a lot of running back and forth between characters until the in-game guide tells you to do something else. It is a bit unnatural, but it has the benefit of being justified by the Sex Note guiding you to your next conquest.

The most significant asset that SexNote has in its favour is its art. It has genuinely gorgeous 2D art. Most of the animated scenes are great as well. A lot of 2D games really rely on having good art to be successful, and SexNote is 90% there. The other 10% is easily fixed, and then we’d have an okay game with great art.

The 10% here, I’m referring to some art that doesn’t fit the rest of the games’ art style. It’s not too bad, but you can definitely notice it. You’ll also notice that some earlier scenes in the game are more like animatics rather than animations. Remastering these scenes would take a bit more work, but it would be worthwhile considering how close to perfection the rest of the art already is.

Art aside, production isn’t too bad—The UI serves its purpose and the music, albeit slightly annoying, fits the games’ theme. However—when playing through the game—I couldn’t help but notice how many graphical bugs I encountered. I’m not sure if it was just me or something else, but I feel like I saw more glitches here than in any other AVN. Many times I’ve seen elements from other locations appear in the current scene, and certain scene elements overlapped when they shouldn’t have. Nonetheless—since the game is still in early access—we should expect a lot of this buggy-ness to be ironed out soon enough.

SexNote has the capacity to be a great game. It has a lot going for it, especially in the art department. Many of the issues I brought up here are definitely fixable. And stuff that doesn’t need fixing can surely be improved. There is potential here, just not fully realised. Throughout the review I know I sounded a bit harsh, but that’s only because I believe that JamLiz are capable devs who have a deep passion for this project of theirs.

What about you, reader? Have you played it? What do you think about it? Let us know below. 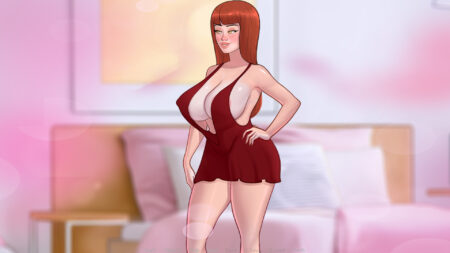 Knight-errant on the run in Siberia somewhere. No stranger am I to daring feats and saving damsels.