I’m not usually one to overlook a good story, but when a friend told me about Ripples, I realised I’d missed out on something that could be a new favourite. The game starts out as a charming and simple seeming tale of sexual awakening and discovery, with all the hijinks that ensue, but then the sci-fi aspect of the game comes in and we start to see a more deeply complex story take form.

The story has some time travel elements to it, but as of Chapter 3, the ripples caused by time travel don’t seem very big. I’m hoping that these ripples help to build the story more, and feed more into varying paths, but this game feels like it’ll have a lot of chapters, so I think there’s much to look forward to.

The art and animations are beautifully lit, the characters are nicely designed, and the adult scenes are sensual in a way I haven’t seen in a while. The use of animations both in adult and non-adult scenes is effective in adding immersion to the story. My only real gripe as far as the character design goes is that the GILF character, pictured here, looks remarkably young, more like an aunt than a grandmother. That may be a limitation of the engine, but as it’s an engine I’m not familiar with, I’m not sure.

There’s a good selection of characters in the game. Some are slow burn, while others are easy to seduce. This balance leads to the possibility of a few adult scenes early on (all of which seem to be skippable), which makes the game quickly rewarding, and with characters that you should be able to get to know better later, regardless of how quickly you might be able to get them naked.

The MC in the game is different from many of the identikit MCs, as he seems much more self-aware. He will comment on your choices to confirm what he’s learnt from them. I found this to be a nice touch that, and when paired with rollback, can negate the need for a walkthrough. This attention to detail makes playing the game that much more pleasurable.

The production is simple and effective, and while there’s nothing vastly different from what’s been seen before, the implementation of it is effective. The choice menu design and placement is a nice touch (at least for right handed players), which makes the game stand out a little. The game’s UI is pretty , and does what a UI is supposed to do: get out of the way and not be obnoxious. The screen composition also takes into account text space in the lower third, so you don’t end up spamming the “H” key frequently. There’s nothing more annoying than having to hide the text because it covers up the good bits.

The story itself is well written and with no glaring grammatical issues to distract. The choices in the game are mostly geared towards determining who to spend time with, but during the time travel section, there is a scene that you only get with the right choices, which makes exploring the game a little more fun, but not complex enough to start hunting for a walkthrough. There are other stylistic choices, such as building character traits to get dominance options, but those don’t seem to affect the story as much, although I have no doubt they will impact the ending. The balance is good for the casual adult game player, but might seem lacking for someone who wants more of a challenge.

Having played the game a couple of times and testing a few different options and paths, I sincerely hope the developer will give us an opportunity to revisit the past for more opportunities to change the present. It seems that the goal is to do exactly that, but I hope the dev pulls it off as elegantly as the story has been told so far. There are characters in the game world’s past that I would love to see again, so I hope there are more visits through time.

I’m trusting that the name of the game is sufficient evidence that there will be more ripples to explore, and while the story is getting pretty deep, I feel I can trust the writer to not get too lost in the complexity to make the story ineffective. I’m hoping future chapters will retain the charm and all the little touches that have made this a fun adult gaming experience.

Have you tried out Ripples yet? What did you think? Let us know in the comments! 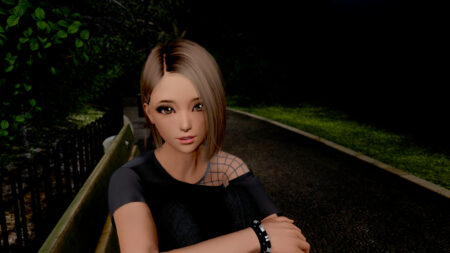