In Projekt: Passion a ragtag crew led by a not always seemingly qualified main character chases after a powerful artifact that is in the hands of a shady corporation that will stop at nothing to achieve their goals. Just like with their first project After the Inferno developer Classy_Lemon proves that they can effortlessly combine action, adventure, sex, humor, and romance with a whole lot of heart and passion.

It has only been a few days since Classy_Lemon released the third big update to their new game, so it is high time that we take a look at what it has to offer. The story follows the classic premise of most great science fiction media: Players take on the role of a wise cracking gunslinger in a world filled with spaceships, hyper-capitalistic corporations, gunfights, and aliens. Centuries after the earth has been abandoned and humanity is spread thin throughout the galaxy, our protagonist lives a life of adventure and danger, working as a gun for hire. At the start of the game, he enjoys some alone time with a trusted companion, but is soon interrupted by an assassination attempt on his life. What first starts out as a normal day in his life, soon becomes way more interesting as his companion vanishes, and it is your duty to find out where they went. As Classy_Lemon state themselves on their Itch.io page:

“Word of warning: the answer may lead to… bigger adventures than you’d planned for. Better pack an extra lunch.”

The first thing that is evident from the moment players start the game, is its high production value. Having spared no expenses, Classy_Lemon offer an Adult Visual Novel that is chock-full of animations, voiced cut- and sex-scenes as well as some great sound design and fitting music. The renders themselves are of extremely high quality, and I might have gasped once or twice while playing. Apart from a normal playthrough players can also view the animated scenes they have found in the Menu or read up on any Lore in the “Codex”. Projekt: Passion also features several achievements that players can hunt for during their playthrough.

Ironically, sex scenes in certain NSFW games can sometimes feel a bit tacked on, like they are just an afterthought, perpetually repeating the same animations and sounds without offering anything new. Classy_Lemon’s first game After the Inferno suffered from this problem (at least a bit). But I am happy to report that this does not seem to be the case for their new game. The sex scenes in Projekt: Passion so far are not many, but they are offer a selection of sexy scenarios, from finding out whether your former childhood love was really as unrequited as you first thought to sexually dominating an alien that looks like a demon or having your cute intern flash her tits at you.

To get the most important thing out first: So far, our protagonist’s crew consists of 5 female companions (including one robot). All of them have different personalities and offer enough time for banter and flirting apart from the usual routine of killing and stealing. From childhood friend to mysterious assassin to android to blue alien, this game has it all!

The dialogue in Projekt: Passion typically features three standard answer options that are marked by different colors: Friendly, Witty and Aggressive. Apart from that, there are also important choices without any color and romancing options that change the way you interact with your companions. Some available choices can lead to death, often in hilarious situations. This highlights Projekt: Passion’s goal: It is first and foremost a funny space adventure with all kinds of quirky characters and experiences. Despite the excellent humor, the game also excels at building an intriguing game world and lore. Stripping back all the snarky remarks, players will also discover a whole range of other emotions behind the characters in Projekt: Passion. Classy_Lemon are able to let their characters perform ridiculous actions one moment and then let them pour their heart out the next one without it feeling cliché or forced. The writing is natural and goes in all kinds of unexpected directions without losing sight of the bigger picture.

It is hard not to praise Projekt: Passion too much. For me, it represents what is right with this industry. Apart from big blockbusters and AAA games, games like these not only provide witty and engaging stories but are most of all jam-packed with passion that reflects in all its aspects from its writing to its professional visual and sound design. Still, Projekt: Passion is only at its beginning and will not provide enough content for more than a few hours of playtime (yet!). I am hopeful for the future and look forward to seeing what Classy_Lemon will further add to the game. 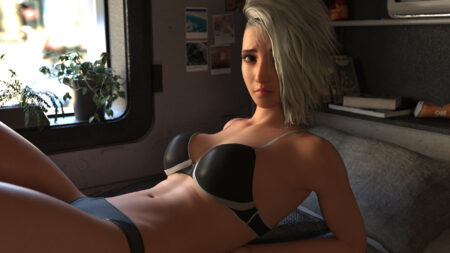