Only after playing Shady Lewd Kart have I discovered how much I craved a mashup between Mario Kart and adult games. Shady Lewd Kart has mashed together the joy of Mario Kart’s gameplay with lewd unlockables and characters. Offering character appearances from over 45 other lewd games that serve as playable characters for you to choose from, powerslide your way to victory as your favorite character, while unlocking scenes and content for your pleasure. I would describe Shady Lewd Kart as a full kart racing experience that offers lewd content for your enjoyment but doesn’t cater to the audience whose sole goal is a quick release.

Growing up, I played a lot of Mario Kart against my buddies. I took a lot of pride in how well I mastered the controls and mechanics of the game. If you’ve played it yourself, you will understand how essential drifting and controls are for a good kart racing experience. The days of me battling against my friends in Mario Kart are long gone now but will remain with me as a cherishable moment from my childhood. I would have never anticipated that Shady Lewd Kart would revive some of those childhood memories and feelings I had back then. Power sliding (Otherwise known as drifting) was my favorite aspect of the Mario Kart games, and the developer has done an outstanding job of reproducing that same feeling of power sliding around the course and maneuvering around various obstacles and hazards.

Within the first ten minutes of me playing, I discovered a feature called time trials and I haven’t stopped since. I’m innately competitive, even against myself, so this feature was particularly appealing to me. Repeatedly, I kept besting my time on each lap and each map thereafter. Those feelings from my childhood of executing precise maneuvers around obstacles while power sliding past every corner came rushing back to me. I quickly became so invested in the games time trials that I began recording my quickest races and sharing them amongst friends. I can confidently say this is the first adult game I’ve ever bothered to record my gameplay of, which says a lot about the production. In the future, I hope the developer considers a leaderboard or scoreboard for players to record and compete against each other’s times. This part of the game offers a lot of replayability and has been a joy for me to experience.

After recognizing that I should try other features in the game, I decided to play through two of the available story cups the game offers. In the story cup game mode, you compete in a series of races against the game’s AI until reaching the final stage, where you’re lined up against a more challenging opponent in a head-on race. Each cup has its respective Pit Girl with their own personalities, cutscenes, and dialogue. During the interlude between races, you’re given the opportunity to interact with these voice-acted Pit Girls through dialogue and choices. I believe the purpose of this dialogue is to offer a dating sim feature for the player to explore and establish a relationship with the individual pit girls. However, I think it’s just not quite there yet. This aspect of the game feels repetitive, insignificant, and slightly unnecessary to me right now, especially since the only clear reward is the pit girl providing an item for you to use at the start of the next race. After starting a cup for the third time, I found myself just skipping the dialogue. It was cool the first time I saw it, not so much afterwards.

The user interface feels like a packaged design with nothing out of place. Everything is consistent with the game’s fun and arcade atmosphere, never veering away from the overall theme. I do think the design for the gallery and shop could be improved. How it slowly scrolls horizontally bothered me when trying to locate specific scenes or unlockables. Otherwise, everything is very quick and responsive. When viewing unlocked scenes, you have the choice to pan, zoom, and rotate the scene to your liking, another unexpected, but appreciated feature.

Visually, the game uses a stylized low-poly 3D world for you to race on. While also displaying vibrant animated menus to navigate through everything else. All the lewd content is drawn art, which compliments the whole theme of the game very well. All of the art is of great quality, and accurately reflects the styles of their respective characters and original designs. It would be very alarming if it didn’t. In addition to the static scenes, there are also voice-acted cutscenes for some characters. All this effort being put into the artwork and character design within Shady Lewd Kart pays off with how thorough the individual character’s personalities are. The idea behind collaborating with all these separate artists and developers to have such a diversity of appearances in Shady Lewd Kart creates this brilliant party atmosphere. Seeing all my beloved characters from other games thrown onto a racetrack is not something I’d envisioned, but that’s what this game is all about. This combined effort embodies the sort of quality and production presented in Shady Lewd Kart.

The voice acting is, of course, complemented with dialogue, which is clear and concise for how little there is. The dialogue is only relevant to the dating sim and cutscene aspects of the game, which right now feels a little underwhelming. It’s hard to tell how significant it was supposed to be, so I’m not going to be very critical of it. There’s enough for the personality of a character to be conveyed, but that’s about it. Apart from voice acting, the sound effects and music were good enough for me to keep my audio enabled when playing, and I recommend any new player to consider what the game offers instead of muting it immediately.

Shady Lewd Karts is listed on steam for $20 USD. The price point is appropriate if you’re looking specifically for a kart racing game that delivers an enjoyable gameplay experience on top of a lewd theme. However, if you’re undecided on whether this game is for you, or if you’re only interested in the lewd content, I would suggest waiting until the price comes down or more lewd content is added to the game.

In conclusion, Shady Lewd Kart has coupled an excellent kart racing experience with noteworthy lewd artwork that’s packaged into a well-produced game. I wouldn’t classify this game as something I’d seek out when looking to choke the chicken, but I don’t think this quality (or lack thereof) undermines its value. The game has both room to grow and plenty to offer, which, if executed properly, can become very successful. I believe the developer is on the right track, and with the right moves, can take this game to the finish line. Now, if you’ll excuse me, I have to go and surpass my record of 24 seconds on the metal madness speedway track. 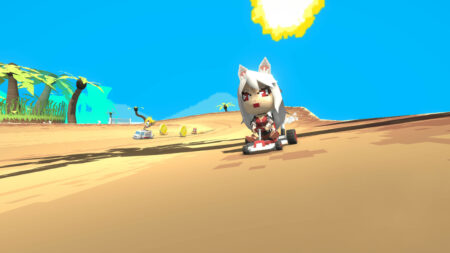 How to do Eye Light Reflections in Daz3D with Octane Render

Did Somebody Say Vikings?

I have recently watch Shady’s YouTube Channel and I am happy to see him in a video game.