When opening the game for the first time, the last thing I expected to find was character development. So imagine my surprise when not only do I find that characters evolve in the game, but that there’s also a kinda love story going on where almost everyone is actually nice (and apparently bi as well).

The game starts by letting you chose the MC’s name which isn’t unusual. What is unusual is that you also get to name almost everything else in the game, the girls, some flowers you find, a skincare brand and more. This doesn’t sound like an issue on paper, but it is kinda weird that you are given the choice to name so many things for seemingly no reason. I do have an issue however with asking the player to name the girls before actually seeing what they look like; you get to name them based on a short description of who they are, but nothing visual.

On the subject of naming things, I think it’s a crime that they chose a typeface that doesn’t have “Ñ”, “á”, “é”, “í”, “ó”, or “ú”, especially when the game has a Spanish-speaking character who constantly says “senor” (should be señor). By extension, this also means that I couldn’t actually use my full “IRL” name which I’m kinda used to, but again, there’s a Hispanic character in the game, feels like a pretty big oversight.

One of the positives is the soundtrack. You won’t find Hans Zimmer here, but in a space that is so dominated by games that have the same 3 pieces of music, it’s certainly refreshing hearing new music. Also, the main menu music goes pretty hard if you let it play for a while (trust me, stay on the main menu for a solid 1 or 2 minutes, and you’ll see what I mean).

Some quests seem to expect that you finished other quests beforehand, even if they don’t specify that. For example, there’s a specific Raven quest that broke because another quest used the same place for a different thing, and I had to guess what to do because the scene that was supposed to tell me didn’t trigger until after I finished a different Reyna quest.

I have to mention too, that I’m not sure what the “rewind” button is supposed to do. I’ve clicked on it thinking that it would behave like the “back” button on Ren’py games, but that isn’t the case, in fact it seems to reset back to before you trigger talking to a character. On the subject of weird behaviours, sometimes clicking during an animation doesn’t advance it (it’s supposed to).

On the plus side, this game has a better excuse than most to have everyone be super attractive, and it’s that most of the girls are actually Pageant girls.

A thing that surprised me is the sort of commentary on capitalism the game has, it comes from the fact that the game has a currency even though it’s set on a deserted island (at least it looks deserted). It’s a light-hearted commentary, but when you’re not expecting it and it’s there, it’s definitely a surprise.

Going back to the story though, if you are nice to the girls, they’re nice back, and when you get to know them they all have their thing, their insecurities, and their hopes. The game rewards you for being nice, and for spending time with them, you see them open up to you, how they begin to trust you, how they begin to like you. But you also feel how the main character grows, he isn’t just a blank canvas, he has a personality. And as you progress through the game, and the girls begin to accept him, his confidence also grows, he even says as much on a scene where he opens up to one of the girls.

One thing I don’t understand about the game, is the weird thing going on with the screen edges; some pages (like the settings page) have a non-existent margin and some buttons go up to the edges. Then there are instances where the screen has black bars (usually the full-screen art scenes), it feels as though the art team didn’t clear with the coding team what the aspect ratio was going to be before starting.

The art is excellent, whether you like the cartoon style of the game or not, the art is clean and nice to look at. But there are issues; for example when a character has to look in a different direction, the “sprite” is flipped/mirrored, which means, that a character that isn’t symmetrical (like Raven, or the goth gf if you happen to change her name), will have their tattoo or beauty mark in the opposite side where it usually is. This seems to extend into full-screen scenes as well.

Speaking of full-screen scenes, there are sex scenes where you can tell the poses on the MC are used for multiple different scenes, and sometimes they don’t fit the position of the partner.

While the art itself is good, these issues, plus the fact that sometimes the game zooms in on backgrounds that aren’t made for that, and you get a pixelated background for that scene, hampers the experience a bit.

Most of the issues talked on this review are mostly technical, like not being able to use certain characters, or some visual scuff. The thing is, these are all things that could be fixed before the game launches, remember this is an early access game. That is why the lowest score is on the Production side of things, the art is great, and I love me some sweet romance. But when you are spinning in circles because the game didn’t tell you what to do, it really hurts the experience, no matter how much I love both Reyna and Raven.

If you want more pictures of the girls from the game, head over to the Art Section of the website, where you’ll find some pictures that aren’t even in the game (yet), and if you’re planning on trying the game out, let us know in the comments.

Note: The issues with the quests not working properly happened during a new game. 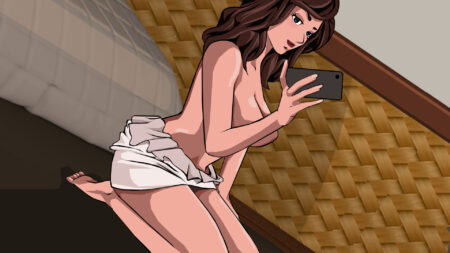 Staff Pick of the Week - A Knight's Tale

The end of Nopy?

I appreciate that this review was thoughtful, and I want to laud the reviewer for pointing out the obvious (in my opinion) oversight of a tilde and other punctuation marks, in a game designed around girls from cultures all around the world, especially when they get so much of the languages dead on, colloquially.
That being said, I have some issues with lack of focus on how good the writing is; not only does this game make dialogue natural and something I don’t want to skip, but the main character and each of the girls have a voice, and development… that shit straight NEVER happens in an eroge or a porn game. The characters go WAY beyond their tropes to have real fears and hopes and backstories, in a far more deep and nuanced way than I have ever seen in anything American and porn related.
Also, the game is self aware about everything, (fetch quests, the harem aspect, the fact that everyone knows information they should never know in all of these games, and the fact that the shit they get into is totally ridiculous), sure, but more than that, the CHARACTERS are self aware, and they build those moments into the game without hack-y fourth wall breaks.
Not to mention, the game’s biggest achievement, in my opinion, this is a sex positive harem game! This review barely touched on that MAJOR point that Paradise Lust brings to the table; The main character sleeps around with all of these girls, and THEY ALL KNOW WITHOUT IT BEING HELLA GROSS! You manage to LIKE the MC, even though he sleeps with everyone, because you can make him NOT act like a sleezewad, and still get nearly all of the sex scenes. That is fucking HUGE. A major achievement in porn writing, in my opinion, and something that I have been searching for my entire porn consumption career.
I don’t necessarily agree that all of the art is great, most of it is not my style, but the character writing is so good, I am totally invested in every plot-line, even Fucking Karen.
So, yeah, I think the writing is WAY better than this game gets credit for in this review, in fact this is the best written American visual novel I have ever played, and it is not even finished yet!
I do want to reiterate that this is a thoughtful review, though, and I appreciate that small games like this are being reviewed and considered.

Appreaciate the review. This makes it easier for us to consider if we are going to buy a game this early in development. Kudos to the devs for having a good rating too.

We’ve always rated this game very highly and here’s that score. You are very cruel! It’s scary to get on your table 🙂

Like I say on the review, I think most of the issues can be fixed, so by the time the game comes out, it’s gonna have a higher rating for sure