After Caribdis recently gave us an interesting look behind the scenes of Once in a Lifetime(OiaLt), I went back to replay the game again. This review is the result of that replay. OiaLt may be Caribdis’ first attempt at an AVN but nothing here is amateur—instead what you’ll find here is a game with an amazing narrative, great humour, and fantastic characters.

We first begin the game with our valiant hero illustrating how lousy his life is—his grades are falling, his dad doesn’t care for him, and he’s got bullies at school. But his life isn’t all bad, he’s got two hot younger sisters and a drop-dead gorgeous mom who all seem to need a bit of extra lovin’ in their lives. However, his incestuous love life isn’t the only mystery that needs solving in the town of Mistbury. Dark forces are rising and they all seem to be related to a secretive cult in search of immortality. Our MC now has to contend with this new threat all the while juggling school and his many relationships.

The overarching story here is pretty enjoyable and is accompanied by good writing—especially for the comedic scenes. The plot is easy to follow while also leaving enough breadcrumbs for an inclined player to try and piece the mystery themselves. Stories revolving around demon mythology and ancient cults are hardly original but in OiaLt, it’s neatly presented and well written enough to be entertaining. And personally, I found the main story to be just as enthralling as the personal character stories between the MC and the love interests. And in regard to the love interests, all the interactions between them and the MC are rather nice. Ranging from cute to hot to hilarious.

As for antagonists—with the major ones being the cultists—they’re not deeply layered or complex, but neither are they overtly one-dimensional. The big baddies do a good job of setting the stakes properly whereas the minor foes pose as a more humourous obstacle in your path.

Finally, I want to conclude this segment of the review with a few comments on the comedic scenes and general humour of OiaLt. Firstly, this is not a game that everyone is going to find funny. The humour is not conceptually layered in any way and it’s not very high–brow either. With that said, I laughed pretty hard at some of the jokes here. Especially a few that come later in the game. Some of the best scenes happen in the background during conversations and you might miss them if you’re not paying attention. The best way to describe the game’s kind of humour is to call it meme–y without any actual memes.

For the most part, the gameplay here is pretty bog-standard for an AVN. But there are a few mechanics that do shake it up a little. For example, four of the seven girls have an ‘affection meter’ that determines whether or not you’ll get a scene with them later. Affection goes up if you picked the right choice during dialog and vice versa. The other girls don’t have a meter but you’ll still need to pick the correct choice for a particular scene to occur or to not lose their path. At any time you can check if you’re following a girls’ path in the pause menu. Picking certain options and committing some actions will also affect the ending you receive so be sure to save often.

It wasn’t hard for me to follow the route I wanted using this system but there were times when I accidentally lost a girls’ path and had to reload a previous save. Still, this didn’t happen often and with common sense and a little bit of attention, it’s easy to know what options to pick to get the route you want.

Another great facet that I wished there was more of are the puzzles. One particularly funny puzzle happens during a party and involves trying to guess a number your opponent is thinking of. Now, unless you’re extremely lucky or an actual psychic, there’s no way to actually guess the numbers. The solution was actually pretty clever when I finally figured it out. In lieu of actually giving away the solution, I’ll give a hint instead—’Trust in your friends.’

First I have to say, messy-haired Lauren is hotter than the sun.

Now then—as I’ve already implied previously—all the female characters are rendered fantastically and are properly lascivious. Even the MC who starts out looking like a psychopath ends up pretty good looking at the end after a slight makeover.

The main gripe I have about the visuals is that early on in the game, some of the locations renders seem to have been badly lit in some areas. However, this dramatically improves as the game progresses, and not only is this issue resolved— the quality of renders also goes up. Perhaps a future update that remasters some of these old locations would be nice.

In terms of production and UI, I really can’t complain about much. The UI is clear and gives you all the info you need e.g., ‘affection meter’ and girl paths. The UI also looks appealing and definitely fits in with the theme of the game. There really isn’t much to criticize here. However, overall production could’ve been improved upon in certain areas. Although serviceable, There’s nothing that really stands out.

Many times when a new developer makes their first game, there are usually either a lot of small mistakes, or a huge oversight, or maybe even a mix of the two. Whether it be bad writing, a buggy game, or non–functioning game mechanics. Saying this shouldn’t discourage people from making games. On the contrary, it should embolden developers into trying new things and making mistakes. It is of course how we learn.

However, Caribdis has managed to avoid all the pitfalls that plague new developers while also delivering one hell of a game. And I believe that should be commended. Starting a project with zero experience is a daunting task for anyone but he’s definitely knocked it out of the park with his very first outing. I wholly recommend everyone reading this review to try out Once in a Lifetime. I’m sure you’ll have a blast.

What about you dear reader? Have you already played Once in a Lifetime? If you have any thoughts, please comment! 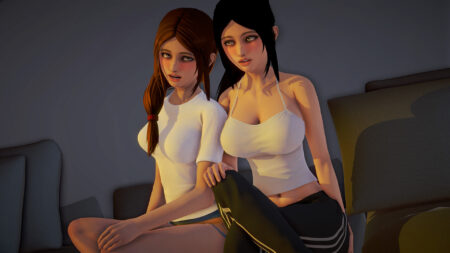 Once in a Lifetime Review

Moms are sexy too – Top MILFs in lewd Games part 2