The first game by Developer ILSProductions, Now & Then – A Tale of the End follows the story of a middle-aged father trying to survive your average zombie apocalypse with his adopted daughter while being stuck in their apartment. During their fight for survival the characters not only meet new foes but also old friends along their way.

As its’ name already suggests, the game plays out in two different time dimensions; In the past, we see the protagonist struggling with raising his newly adopted teenager daughter after his wife passed away. During his struggle he meets a colorful array of characters from social workers to teachers and friends of his new daughter. Several flashbacks introduce the player to the background of the characters and show why they are who they are. In the present however, things are drastically different. The base story and setting of Now & Then has already been told a couple of times; After an unknown virus emerged, most of the human population quickly turned into flesh eating maniacs, dooming pretty much the whole world in a couple of weeks.

What makes Now & Then so interesting in contrast to many other apocalyptic survival stories is its realistic approach. The game perfectly captures the boringness and creeping doom of a post-apocalyptic world. Quite a lot of dialogue is occupied with the inner monologue of the protagonist, telling the player what kind of work it is to survive during times like these. His days consists of different tasks: He must secure food, patrol the area, wash their clothes, drag zombie corpses away and more. While I am not a survival expert myself, Now & Then seems very realistic. Most of the time the protagonist does not bravely dive into a group of zombies or machete fights with other survivors. More often than not he has to keep a look out from the balcony of his apartment. Constantly on edge, but also constantly bored. While the protagonist and the other characters sometimes go on patrol outside, most of Now & Then plays out at several key indoor locations. Often the protagonist and his loved ones will have to stay inside, keeping away from the hateful gaze of any undead. It is a testament to ILSProduction’s great writing that the confinement of the characters never gets boring or tiring.

So, the Apocalypse is hell, but it is a boring one. Death comes slowly. The action fan in all of us does not need to worry however, because there are still mask wearing bandits and AR-wielding babes and the coming end of the game also seems to hint towards a bombastic final fight. But what makes Now & Then so interesting as a survival story is its ability to juggle the fight of man vs. Nature and the fight between humans themselves with the former often being the bigger threat. A lot of other zombie stories seemingly forget the central part of their name and portray humans as the ultimate danger. This game however delivers the whole package: There are shotgun wielding bandits that might attack, but at the heart of it there is the constant danger of the zombies and the collapse they bring with them at every turn.

Just like any other Adult Visual Novel Now & Then also discusses personal relationships, love and sex next to its main story. There is an option to not engage in any sexual or romantic relation with any of the other characters but the route most players will play, sees the protagonist and his adopted daughter slowly succumbing to their desires while being trapped in their small apartment. After some time they finally give in and start a relationship with each other. I am personally not a big fan of such ‘forbidden love’ relationships between related (not by blood in this case) characters but Now & Then never treats this plot point as mere convenience or pornographic material. Instead, it deeply engages with the ramifications and background of this relationship. This game is also seemingly one of the best places to talk about these kinds of relationships that would normally be condemned by a functioning society. After all, society as we know it is now gone, seemingly forever. Who is to say it is wrong for two consenting adults to find comfort in each other’s arms in a grueling world that is out to get them at every turn?

If the player wants to see any sexual or romantic relationships they are forced to engage with the adopted daughter, but they also get her blessing to engage with other partners at the same time. ILSProductions also treats these relationships with care, often times showing conflict and arising problems but most importantly healthy discussions and conflict-solving between the characters. It is always wonderful to see an Adult Game that develops real relations between characters and shows a healthy and functioning open relationship.

Seasoned fans of Adult Games might already recognize the typical Honey Select visuals that Now & Then employs. The looks of the girls you can date are different enough so that every player should find something to pique their interest. The renders themselves range from good to great, always fitting the different scenes. The developer ILSProductions shows a good eye for lighting, staging and other important visual aspects. The background and environment accentuate the apocalyptic setting and always show just enough destruction and death to keep the player on their toes.

On top of the good renders the game also boasts several animations during sex scenes with quite a lot of boob jiggling all around. The animations are also supported by sound effects. Sex scenes however are not the only parts of the game that get this kind of action. The players of Now & Then can not only listen to fitting sound effects during important parts of the story, but also to a consistent soundtrack. On top of that, several visual effects at key points of the story round up the package. On the gameplay aspect of things this game is your typical Visual Novel with several story altering decisions. Almost all the choices the player can select during their playtime feel impactful and important. There are also different stats in the game showing for example the trust or love certain girls have for the protagonist as well as their nerve or conflict.

Now & Then is a captivating survival story of characters finding love while trapped in an apocalyptic world. Operating on two different time dimensions, it gives the player a deep dive into its characters and the way their world is shaped after the disastrous events in the beginning of the game. Fans of apocalyptic or survival stories, fans of ‘forbidden love’ relationships and most other Adult Game enjoyers will get their time’s worth. While it can be a bit of a slow burn from time to time, it excels in all the right aspects. With its end just right around the corner and already 23 Updates in the game also packs a lot of playtime. 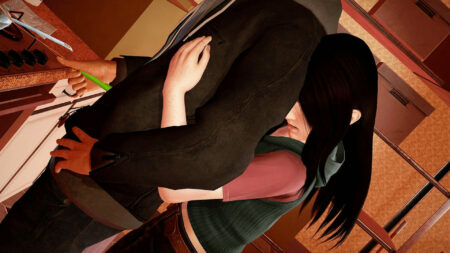 Now & Then: A Tale Of The End Review

Staff pick of the Week - Price of Power