Combat is nothing new when it comes to an Adult RPG, but the way Monster Girl Dreams (MGD) incorporates it has certainly surprised me. MGD is primarily a text-based “Battle Fuck” RPG. That’s right, combat is focused around sexy turn-based fights between you and hundreds of other monster girls. You play a character that has recently graduated top of their adventure class and has accrued massive debt from school as a result. Your character’s goal is to either repay their debt or eventually conquer the final boss, the Demon Queen.

The combat in MGD is very in-depth; although I found it intuitive, it may take more time for some novice players to learn it. When you beat an opponent, you receive experience which you can use to levels up skills and gain perks. As expected in any battle system, your character becomes stronger as they defeat more and more opponents. Strength isn’t the only reward for victory, though. You also gain “Eros” which you can spend at shops. The game has a collection of shops for the player to advance their skills, and progress through the game. These skills all require a certain level of expertise and can be used later on in combat. For example, if you discover the fetish of your opponent, you can use their weaknesses against them through these skills. This, to me, is what sets MGD‘s combat apart from many others in the genre.

In addition, shops also provide potions and herbs for the player to gain an edge in combat. This edge is essential when facing bosses in the game, due to how difficult they can be toward an unprepared adventurer. Properly leveling up and making use of equipment is a must. The game does a great job of making combat fun and rewards you for both positive and negative outcomes. Combat is strictly, “winner takes all” but when combat is based around giving your opponents sexual pleasure, is there even a loser? The developer has emphasized how losing is part of the overall experience in their decisions, which I find makes the game more enjoyable. I remember my initial encounter with the first boss in the game; I decided to try my luck against her before I was even remotely prepared. You can be sure I lost, but instead of being punished for my failure, I discovered a well-written losing script accompanied by visuals I would have not seen otherwise.

The game is so jam-packed full of content, I lost track of how many hours I’ve sunk into it. Even so, I am still finding new places and characters in the game that I had never seen before. In a game that involves a combat system, there will presumably be grinding. You will have to grind levels and “Eros” by fighting some of the same mobs over and over again. The grinding didn’t seem excessive to me, but I want to emphasize that it is present in the game. Some dungeons require you to have specific skills to advance, so you will need to grind until you’ve met those requirements. Thankfully, the game features a large map full of many dungeons, quests, mobs, special events and bosses that brings variance to the grinding process.

The game is still a work in progress and thus is missing art for many characters; this is disappointing and detracts from the overall experience. However, the developer includes detailed descriptions illustrating the way a character looks if they lack art. It may not be as good, but it is sufficient for portraying what will be added in the future. Nevertheless, the developer has done a great job with the art that is in the game. The monster girls are portrayed beautifully, even considering they are monsters. With all that being said, I still found the visuals to be the weakest part of the game; I’m looking forward to seeing what additions are made.

I never thought it would be possible for me to become attached to characters in a game focused around sexual combat. The more I play, the more I continue to learn about the characters and inevitably form relationships with them. This can only be a result of very good writing. In the game, you can build trust and affection with characters, which unlocks new dialogues and events. Some monster girls put on a tough persona but can become very sweet and loving once you raise their opinion of you. This is executed in a very natural way, which impressed me. All of this has only been complimented with how descriptive the lewd scenes are. For me, the writing stood out the most compared to other aspects of the game.

This game has blended writing and combat very well. The developer has stretched the limits of what the Ren’Py engine is capable of by providing unique combat RPG elements on top of quality writing. The game is currently free for anyone and I cannot recommend it enough. I’m looking forward to the bright future this game has and all the content that will come with it. 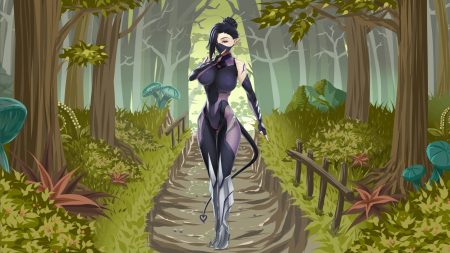 Buy me a CoffeeTwitter
PreviousReview

How to Use Nvidia Moonlight to Stream Games to Your Phone