Milky Touch stands out from the crowd with some truly breathtaking art, but unfortunately that art is seen too infrequently to make this game a thing of beauty.

Tools like Daz Studio and others that offer pre-made assets, poses, and environments can make it relatively easy to create art for adult games. I mean, there’s a reason so many games have 3D art. There’s a time investment to be certain, but a lot of that time is waiting for the computer to do all the work. These tools can be invaluable to solo developers like me who can’t draw at all.

That’s why, when a game like Milky Touch comes along with art that is not only different, but detailed and beautiful, I sit up and take a look. There’s an instant appreciation of the artistry and respect for the artist. Unfortunately, most of my excitement for this game waned pretty swiftly as I read and clicked through interminable sections of exposition and descriptive writing set to backgrounds devoid of characters or activity. Clicking through several paragraphs with nothing visual going on is more reminiscent of a text based game than a visual novel.

Even the sex scenes are overly wordy, and often make you wish for more art to fit the descriptive writing. While the quality of the text isn’t as bad as many games out there, there are still a great many typos and even missing words, and for a text heavy game like this, that’s a serious issue.

The story of the game is somewhat interesting, but is made dull by the writing. If this game were more tightly edited and effectively written, then it would have likely half the actual play time of the current release. I’d have preferred that, to be honest. I mean, sitting and looking at an empty classroom knowing that the attractive teacher is supposedly teaching, but not seeing her on screen? That makes the reading a lot less interesting. If there was less text and more frequent use of the existing art assets, the game would be a lot more bearable.

Production values wise, Milky Touch has a highly customized user interface that looks good, but the design elements feel as if the game is set at some point in the past.

The developer has added a relationship editing feature in the menu to allow you to determine who is related to whom according to your tastes. It’s very nicely done and shows good attention to detail on the development side.

I understand that art takes time, but as this game stands, the only good thing about it is the art and general production values. With some better writing and a good proofreader / editor, this game would be a pleasure to play, but for now, it simply encourages a player to skip through the story just to see the art. 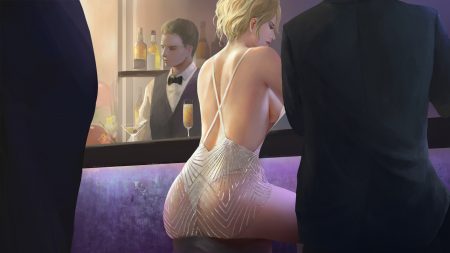 A Simple Guide to Writing a Story

Free-roam folly - The fall of a genre.