So many adult games these days have evolved into stories with multiple and deep characters and a world built in a far more serious tone. Every once in a while there is a game that comes out that does the opposite and decides to just have fun with the entire premise and characters. Very rarely does a game manage to do both at the same time but in different ways. Meltys quest ends up doing just that in a very fun and unique way. Although the game was released back in 2017 it was the first game i played on steam and what actually got me into the adult gaming scene.

The term “kogal”, which in Japanese is kogyaru, is a Japanese sub culture that involves schoolgirls being very materialistic and attention seeking. A lot of the times they will identify themselves with things such as miniskirts or micro-skirts and loose socks. Things also such as a very noticeable tan or dying their hair (typically brown or blonde) or even wearing high end jewelry. Typically they are very open about sex and love to flaunt their money through things such as attire.

The game itself is a RPG Maker style game that includes many RPG elements of leveling up and stat building. You have 2 different ways to level up in this game and both are needed to be used in order to beat the game and especially the hidden bosses, depending on which ending you want to get. Experience is one way to level up and is obtained when killing an enemy and slut points is another way which is used when losing to an enemy, which will result in a scene with sex scene involved. I’ll go into detail of how that works in a later paragraph.

Story wise the game starts off as a normal game in which the princess, who is a kogyaru, lives in a castle with her family and is the youngest of 4 daughters. The Grolido Monster Army rise up from the underworld and kidnaps her sisters as well as destroys the castle and sends monster upon the world. It is left up to Melty to figure out how to destroy the Grolido empire and fix her castle and rescue her family. The story of course is typical in a lot of ways but the fun comes from the execution of how our kogal princess reacts to them. The endings, of which there are 6, can range from way out there to very heartwarming and can put a genuine smile on your face.

Melty herself is quite the interesting protagonist. She falls well within the culture of a kogyaru with phrases like, “Well, I’ll like somehow fix everything!”, however as you begin to go through the adventure you begin see her grow and change into someone who has a little bit more depth to her. Depending on how you play the adventure her attitude at the end can also be different. Now some people may get annoyed at that type of ritzy attitude at everything that happens but others may find it refreshing to have a protagonist that isn’t so serious and therefore can somehow make you roll in the floor laughing while handling your business.

The battle system itself is quite different from most RPG Maker games. There are of course good and bad sides to it. You have your basic stats of attack, defense, slut power and slut defense. These level up as you level up by killing enemies and that gives you experience but barely any slut points. When you lose a battle you get no experience but you get slut points and a sex scene. You also have a graph that shows all of the different fetishes that you can do and how many times you have done them that range from the vanilla stuff to really niche fetish things. Those things all add up to give you a SP level or slut point level.

Continuing with the system you also have outfits that can give skills to use in battle. They range from attack spells to defense spells and even spells such as haste. Some of these spells also are dependent on how high or low your SP level is and certain outfits can only be worn at certain SP levels. Now if you earn enough SP points while wearing that outfit then you can use that skill even without that outfit on. However here is where some people might have a problem. Due to how there are 2 different leveling systems in play that means that you might be grinding for a while in one area so that you can learn a skill or get your SP level up then switch to just regular killing to get experience to increase your actual level.

The scenes themselves are only drawn instead of 3D models, which some may find as not that much of a turn on, however they are very well drawn. You can tell that there was heart put into each drawing from the facial expressions to the positions of the characters. The things that are said while the scene plays out is what really makes it shine though. Like at one point her and a lizardman are going at it and she is worried about getting pregnant so there is a momentary joke about her asking if he is going to take care of the kids and he says no because he is just a lizardman. Of course to some people laughing your ass off while handling business might not be what they are looking for.

One recurring theme in this game is pregnancy and giving birth.

Last thing i want to touch on is the difficulty level. There are 3 of them in total. There is kogal mode which is your easy mode for ones that just want some to go straight to the action as easy and as quickly as possible. The next difficulty is princess mode which is your normal mode for those that want the typical difficulty. New game + mode ,which is called true princess mode, is the hardest difficulty and will throw some interesting challenges your way.

Overall this game might not appeal to people who want a less complicated sex game or a person who are only really into 3D models now or just a more serious game overall. For the people that don’t mind those things though this game offers a very different experience in terms of a fun and lighthearted sex game that explores all sorts of fetishes and yet still can maintain some very sweet moments in the end. Which speaking of endings it is also helped that the song at the end of the game is an amazing song that fits perfectly with the entire game. 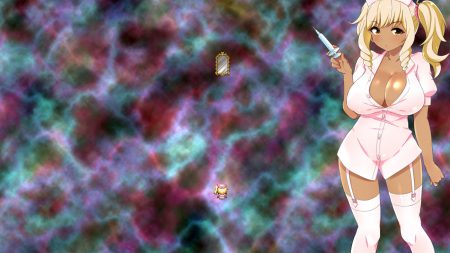 Hillside - An Exploration into the Cost of Beauty?

An Adult Comic Universe in a Visual Novel

I’ve also played and enjoyed Melty’s Quest! I found it a thoroughly enjoyable game – both because of the fetish content and the great art! As a rule, I prefer 2d art, so the style was a complete win for me. The dialogue really made the game stick out, I think – so often H-games have dull insipid dialogue that feels practically identical to so many others, but Melty’s Quest has a variety of interesting conversations with interesting characters. I think one of my personal favorites is the rich guy character that you do some “work” for. I expected him to be the typical Weinstein-esque fat rich bastard that appears in so many H-games, which he kind of is, but his true character is revealed via an inspirational tear down and reconstruction of Melty’s approach to hard work that leaves her teary eyed and profoundly grateful for the new outlook on what worth truly is.

I highly recommend Melty’s Quest to anyone looking for a hot H-RPG with dialogue you won’t just want to skip as quickly as possible. I think the rating for this game’s visuals is criminally low, but if your a 3d loyalist, this might not scratch your itch.