Magic Tricks‘ writing was a breath of fresh air in the realm of the classic “demonic summoning” trope that can be seen in a lot of anime inspired content. Although there are a handful of typos in the story, for a non-native writer of English, the author of Magic Tricks does a pretty solid job of taking you along on a sexy journey thanks to the discovery of the eponymous Magic Tricks spell book.

As it turns out, demons are pretty bored in hell! Whodathunkit! They love coming up to the Human realm, but rarely do they ever meet people who greet them without first attempting to subjugate them with control spells (which our MC Mia is terrible at casting).

Later on in the story, there are some pretty wholesome scenes between Mia and a male Incubus that, fun lewd scenes aside, I felt like were a nice touch and helped developed a sense of caring not only for the main characters, but for the demons as well.

While there is no specific deviation from your usual “read and click choices” mechanic in this visual novel, that doesn’t detract from the experience and in fact helps focus the game on the writing and the art provided by H Lemon Studios.

I had two main gripes as far as the gameplay is concerned while playing Magic Tricks;

Firstly, I found that there was no way to hide the text box during the sex scenes, which would have made enjoying them a lot easier. I couldn’t find any mention in the game’s menus about how to do so, nor on the game’s Itch.io page.

Secondly, and this is more of a nitpick than anything, but I feel like it would have been a bit more aesthetically pleasing if the text box for the character names was only visible when a character was talking, rather than always being present even when there were no characters presently talking.

For those on the look out for cute anime themed visual novels by indie developers, I would say that Magic Tricks definitely fits that bill and doesn’t skimp on the amount of lewd scenes provided in the game.

H Lemon Studios art style is charming, and while I occasionally found the shading to be a little bit weird in some instances, overall I feel like their art style is perfect for this kind of story telling and I am definitely looking forward to reading more of their visual novels in the future, should they release more of them.

While not offering too much variance in background music, the BGM that the game does have is calming and helps build the overall atmosphere of a “cute sexy romp”, which definitely endeared me to both the characters as well as the developer.

I would have enjoyed it more if there were sound effects during scenes where magic was being cast, or where the characters were having sex either with each other or with their summoned demonic companions, but overall the experience was a pleasurable one.

Overall I really enjoyed the time that I spent reading Magic Tricks and have no qualms about giving it a wholehearted recommendation. It wasn’t afraid to portray demons in more than just your generic “we’re evil and we fuck things” trope that can be seen in a lot of similar works, and I appreciated it for that.

Have you played Magic Tricks? Let us know what your thoughts are in the comments, and be sure to join the LewdPixels Discord! 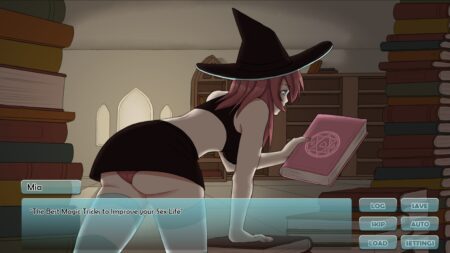 Staff Pick of The Week-Long Live the Princess