On second thought, 2020’s pandemic should not have been like this at all. The epidemic plaguing Lust Epidemic is a dark one. A power, if in the wrong hands, might be the end of us all. The now-complete Lust Epidemic game features a couple of rival schools seeking each other’s destruction while a number of shady individuals (including the MC) go around using a powerful drug to turn the lusty women into sex-crazed sluts. You play a student who visits the rival school to work out some sort of truce. While there, some murder happens and you have to both solve some mysteries while protecting your loved ones. Not all of your “loved ones” are into you at first, but you soon find that the mysterious drug helps with this. Using the drug, you build a harem of MILFs, a nun, and a couple of students.

As mentioned before, the story is a dark one. Some [should-be] trusted adults are using a lust-inducing drug to seduce students in one of the two rival schools. The other school, a religious institution, is also suffering trouble with the drug as trusted adults there are using it on the students there. As the game proceeds, the MC discovers who knows about the controversy and who is trying to cover it up. The story is mostly corruption, but the mystery part is fairly unique in the corruption genre.

The visual images and animations in this game are top tier in terms of uniqueness and quality. That said, most of the game is spent in 2D RPMG-land (RPMG being the game engine) which I think makes it difficult to present a coherent style. This game does its best, however, with very custom 2D RPMG sprites and environments that match the overall theme of the game. Within the game, there are various outfits and sexual positions you can unlock for many of the female characters which is a nice touch and adds depth.

This is quite the long game. Lots of movement to various places on the large map. There are puzzles to solve and items to find that unlock doors and other parts of the map. Without a walkthrough, this game could take weeks if not longer. With a walkthrough, it’d still take several days up to a week to get through the game and all the content. Without a walkthrough, there is an in-game “crystal ball” in your inventory that will give you clues on what to do next. The puzzels and constant navigating around can become quite tedious if you aren’t into that sort of thing. If you are looking for a story without grind, this isn’t it.

Overall, Lust Epidemic is a must-play game in this genre. It’s fun, sexy, and worth every minute you spend on it. As a finished game, you won’t have to wait for development updates and you can go from beginning to end at your leisure.

What are your thoughts on Lust Epidemic? Will it be in your play list? Let us know in the comments. 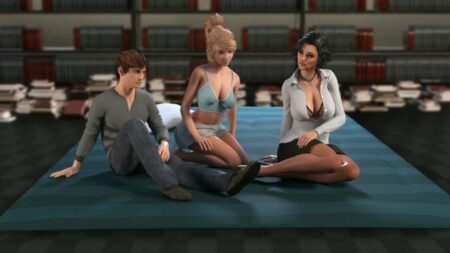 LewdPixels is a year old - A year in review.