What does esoteric occultism, King Arthur of Camelot, and Poker have in common? To be painfully honest, not much. But it’s all present and of grave importance in Love of Magic. Quite rarely have I seen such an eclectic mix of elements in games, let alone adult games. And rarer still is it a cohesive and entertaining venture. So, does it work? Well, that’s what we’re here to find out.

I knew of the game for quite a while, but I only took a deeper interest once I learnt that poker was involved. Poker is one of my all-time favourite social games to play, and finding out that the games’ combat mechanics revolved around playing poker hands was enough for me to take the plunge.

We begin the game as we’re wishing our MC, Owyn’s (can be renamed) mum, goodbye as we learn that we’ve somehow won a scholarship to a Scottish University of some sort. Not soon after, we’re on a plane to the Scottish Isles. A quick recap by our MC explains how he recently learnt of his magical abilities and a suspicious letter of acceptance into a magical university halfway around the world. Once arrived and settled, it’s not long until we run into some of Edinburgh’s more ‘colourful’ characters; a princess, a kitsune, and a couple of Gods here and there. Now Owyn has to do his best to keep up with his studies, maintain his relationship, and handle the stress of being the centre of a prophecy thousands of years in the making. Not to mention tumultuous politics, both magical and mundane in nature.

The plot heavily borrows from Arthurian legend of yore but remixes it in a fresh new way while also introducing original elements into the story. If you’re familiar with the folklore, you’ll most likely recognise a few of the characters that show up. They play an important part in the game’s story, albeit with the stage presence of the main cast. In-fact, many of the larger-than-life characters that influence the plot almost don’t ever show up, but only to string along our MC towards his destiny. Speaking of larger-than-life characters, the game also brings in a diaspora of deities from various pantheons. You’ll see allusions to Gods from Celtic to Norse pantheons, and many play a part in the events of the story to varying degrees. The game does the good job of meshing extant mythologies into it’s world in a way that’s natural and authentic.

Now, if we look at the more down-to-earth characters in the cast, I’d say that they’re more interesting than the almighty Gods that surround them. All the characters have their own motivations and priorities that they value and aren’t willing to break them just because you’re the MC. For example, early on in the story, Owyn meets with a Princess Emily and a romance quickly blossoms. However, as her duties to the throne are just as important to her as is her love for Owyn is, it presents her with an obvious dilemma. How she deals with this conundrum is a major part of her character arc in the first part of the game. It’s refreshing to see how magically imbued people have to deal with personal problems that we can all relate to while also battling monsters and uncovering ancient prophecies. Even more so, the execution here is exemplary.

On a lesser note, I really do like the many allusions and references to obscure culture. The most easily recognisable example of this is the bar that Chloe—a friend of Owyn’s mum—owns; the Aleister Crowley. Named after the 20th century occultist, it’s only one of many references that I found. And surely, I’ve missed a few. It flavours the story of the game and authenticates the world building.

Visually speaking, the characters here are simply stunning. Many of the characters are rendered in what I would call ‘realistically attractive.’ Looking beautiful but with an air of authenticity to their design. My favourite of which being Chloe. Her design is all at once enthralling, sexy, and mature.

One thing that I like is the characters animations during dialogue scenes that inject them with a bit more life and soul. Although this is a double-edged sword as the motion tweening in some scenes can be a bit too much and causes them to stretch to the point of looking a bit off-model. This is most prevalent is some animated sex scenes, as the tweening causes the lighting on the character models to just look wrong. This is not a huge issue as it only occurs in certain areas and otherwise looks fine 99% of the time.

Production-wise, I think that many games should take a page out of Love of Magic‘s UI design. It’s clean and concise, but also harmonises with the rest of the game. It works thematically without cluttering the screen with too much information. And even if you feel that it’s a bit too claustrophobic, you can hide some UI elements for extra breathing room. A nice added touch is the simple animations that play when hiding the UI. Small touches like that make the experience all the more enjoyable.

Before we move on, I wanted to touch on the available sex scenes in the game. Whereas many adult games focus on the sex scenes being the main ‘meat’ of the game, in Love of Magic they feel more like bonuses that add to the intimate moments between characters. With how story focused the game is and how combat takes quite a big chunk of the game as well, it may sometimes feel that the sex scenes are often overshadowed by all the other events that are happening. Initially I thought that this was a detriment to the game but as I played on, the cycle of story, then combat, then sex became more natural and actually kind of grew on me.

And now on to my favourite part of the game; Poker! Or more accurately, poker with a dash of match 3. Initially, when I first picked up the game, I assumed that it would be more akin to traditional poker with betting rounds and such. Instead, it is more like trying to create poker hands with hole cards and a community board. As in real poker, higher tiered hands may have better effects or damage. I say ‘may have’ as your hands can be augmented with magic gems that can change the damage or effect when you play a specific hand.

This adds an extra layer of strategy to the game, as mixing any gems and pairing them with an appropriate hand is key in combat. On top of that, you can also bring companions along, and they provide different abilities that further enhance your combat prowess. It doesn’t stop there, as there are a few RPG elements that really add to the way you can customise your build. The stats that you can increase will also affect certain skill checks in dialogue and may open up the scenes even more.

At first, I was a bit disappointed that the gameplay wasn’t the true poker experience that I was expecting, but playing on helped me appreciate this new form of poker. Strategizing the best way to play a three-of-a-kind or picking what gem to slot into my full house made the game quite enjoyable. It’s not going to be wining any awards for innovative game design, but it provides a more than engaging, albeit simple gameplay loop.

When you’re not throwing playing cards at monsters, you are busy building relationships with the other characters you’ll meet in your free time. There is an in-game calendar that lets you know of any future important events, and each day is split into three sections. Unless there is a story event happening, you’re free to explore around Edinburgh and try to strengthen your self for future battles. Although there are no true ‘free actions’ i.e., actions that don’t use up time, I never felt the pressure of any constrained time limit and always felt like I was competent enough to face any challenge. Whether that be my own prowess or the game secretly throwing me a bone, I do not know.

However, not everyone is interested in poker or even in card games. Well, a wholly welcome feature of the game is that not only can you change the difficulty of the game, you can completely skip the combat sections if you’d rather enjoy the story instead.

Love of Magic has been an interesting game for me to play. It’s got quite the compelling fantasy story with the world building to back it up, beautiful and complex characters that you could easily fall in love with, and it’s a decent poker-based card battler. Love of Magic is a game that has something that everyone can enjoy. The game reads like a fantasy novel, plays like a card RPG-lite, and is a tonne of fun. It doesn’t have the best animations out there, but it makes up for it with stellar writing and characters. For me though, the best aspect was actually the combat sections. I was thoroughly enjoying my time in battle as well as the gem metagame. It is for sure a game I’ll be keeping my eye on. 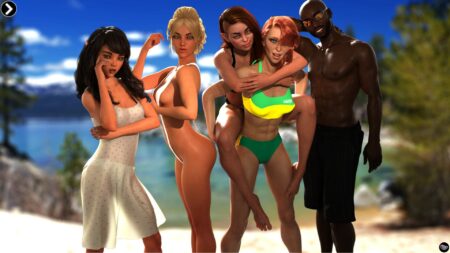 Staff Pick of the week: Paradox