As LikesBlondes, the developer of Life with Mary, said in the description of the game’s steam page there will be two more updates. One in which they will add music and sounds to the game, and a general bugfix after that so the story of the game is finished and game will be a little polished in the future. But the version I played does not include any sound yet.

Life with Mary is a story based visual novel which uses the Ren’py engine. These type of games target the focus about mainly one girl, in the game this is Mary.

Gaming experience can be greatly influenced by the fact that players may find Mary attractive, but may or may not like her personality so much.

Protagonist of the game is a man who is in his thirties. He was antisocial during his youth and it was hard for him to build relationships with people. On the other hand he has a nice career now and lives a financially successful life, but something missing. That’s the point when an old buddy back from the University calls you, the main character, and asks you for a favor. You should let her daughter live in your apartment while she study music in the big city. By answering yes, the story begins.

The protagonist is a good looking charming man in his own way but is not a man of action; usually he is agreeing or disagreeing with the things that are happening with him. Although it is totally reasonable that he tries to conform for the situation, he can’t always show his feelings but makes gestures for Mary to stay with him. Mary needs a stable man in her life because her dad is not a very good role model, so it makes sense why she is attracted to the main character. Although Mary’s a cute and innocent 18 year old girl, she is not a doll. She fills the apartment with life and causes nice slice of life moments in the protagonist’s life, but even so, she is not a love leech. She also needs personal space sometimes and she spends time with her mother or with her friends.

Supporting characters are not so complex but they were a very good fit for their role in the game. Focus is on the protagonist and Mary, with the supporting characters just spicing things up when story would be otherwise monotonous. The whole city has a good vibe, almost everybody knows everybody and the dialogue makes characters likeable, reasonable, and sometimes funny.

Pace of the story is slow, with the progress of how characters get to know each other and start developing feelings.

Tone of the dating is romantic lovey-dovey style. Personally I like this, but also see these things can be too salivating romantic with clichés for players. How you feel will depend on your personal taste.

Writing is simple, fluent to read. It is a good sign if players can read it for hours without pause. The most annoying part of the text are the random question marks that appear from time to time in places where they do not belong, sometimes instead of letters. Game has a main topic in the story about age difference: does this kind of relationship work and how can you make efforts for friends, society, and family to accept it if you feel that your relationship is serious?

Life with Mary looks good but the visual level of the game is not top of the top – just simple good. Renders and assets are absolutely not aged wrong but it seems that game was probably nicer for the eyes of a sexual adult game player in 2018. Biggest problem is the lighting, especially that phenomenon where faces of the characters are too dark in places where there should be light. This unfortunately involves approximately 40% of the game. The UI text bar has a nice sleek design, transparent but shows the color of the game’s theme from main menu. Character avatars next to the left side of the text are a good idea but the lighting problem affect them too.

Character models in the game are represents high quality in my eyes. Posing of the characters feels natural and well placed. Mary’s character model is unique; of course she is beautiful but you can imagine that she is insecure and shy and not a confident supermodel. I think it is really important that appearance and personality of the character are fitting together. Character models in the game detailed, for example you see that Mary is her mother’s daughter because her faces are similar but not the same.

First part of Life with Mary is about dating and teasing. Only the second part of the game has sex scenes.

Mary is a skinny 18 year old girl with small, firm tits. Maybe that’s my favorite body type for a women so I was curious and patient with the slow pace of the story. That’s why I said the fact that you really attracted for the appearance of Mary or not will be largely determinate your game experience. Mary is a virgin in the beginning of the game. I totally understand she wants to discover her sexuality with someone trustworthy, slowly step by step. The writing makes you feel how Mary gets better and more confident at sex with time. Mary feels like a real character, not like a sex doll. She is inexperienced with most of the sexual actions but she wants to learn, although if something is not so comfortable for her she will always tell you. If you’re interested, you can do little side adventures with other characters near to the finale but this is optional. Sex and lewd scene animations are short loops, I would say I found 60% of them arousing. You can really see how the quality improves and gets better and better as the game goes on. Compare the first animation to the last ones and the improvement really shows. Unfortunately I found some animation glitches, two or three times.

In the game you can collect love points for Mary due to your choices. Although some key choices will open up events for you. There are a few moments in Life with Mary where, if you don’t have enough love points, Mary will leave you and the game ends before the final end. Game has 3 main endings and different variations by player’s choices. My playtime with Life with Mary is 13 hours but I’m a really slow reader and like to search and think about details. Playtime for an average player would be approximately 8-9 hours.

Despite a few minor technical problems, Life with Mary is a good romantic slice of life sexual adult game.

If you are attracted to Mary by her appearance then this game can be a feel good virtual girlfriend sensation. Main topic of the game is age difference from a perspective of two people who falling love each other and up to the player to experience it. 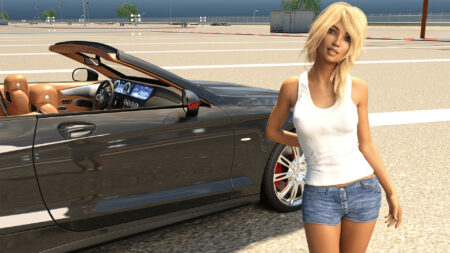 Remember when I found sexual adult game genre, a whole new world opened for me. As a fan, I started to handle it more like a hobby than casual fun. During the years I tried many games and found fantastic stories. I like to think that I've got good eye to sort out special ones from the many. Always try to be objective and not push my taste to everyone but also share my thoughts based on my experience.