First, I must confess to spending way too much time staring at the renders in this excellent visual novel. The level of detail in the models and the quality of renders are among the best I’ve seen. In addition, the characters are diverse, have depth, and are easy to remember.

Midnight Paradise follows the life of a young man who risks hitting rock bottom after a failed year of college and disappointing his father. He decides to turn things around and after discovering the existence of a mysterious drug and its supplier and decides to go into business distributing the drug.

The attention to detail in the scenes is quite admirable. As one example, there is a scene where one character is bathing. It would be easy to forget to remove the earrings from the render, but this is not the case.

We do see later in the scene the earrings mysteriously reappear, but overall, I was impressed.

The game play features an open world with a city map and fairly simple navigation. There are plenty of hints (mostly via the phone) on where to go and what to do, so there’s no pointless wandering around. Instead, there are repeatable scenes in several locations that can be accessed via this system.

There were a few places that were hard for me to remember. For example, I could not get the hang of which hallway the MC’s bedroom was. Otherwise, the navigation is well thought out and easy to understand.

As of version 0.13, the story seems to be in the building-up phase. There are hints that the main character (MC) is meant to do something important, but there are only a few clues as to what. There’s even a mysterious character that visits the MC from time to time to remind him to continue on his path but for me, what this path is is still elusive.

Overall, the gameplay and story follow a very familiar pattern. Male-MC corrupts the female family members, gets laid by almost any female with a pulse, and all because something mysterious is going on the MC doesn’t quite understand. There’s nothing wring with this style. It works for me but those looking for more departure from the norm may find Midnight Paradise wanting. It does not break free or steer too far from the well established pattern. I continue to enjoy and look forward to each Midnight Paradise release. 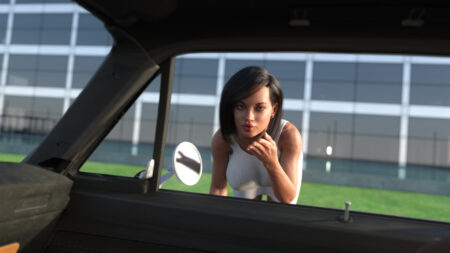 Structuring Your Project: A Ren’Py Howto