Knightly Passions is an adult visual novel currently in development by FEYADA featuring deck-based combat, animated lewd scenes and minigame mechanics. You play as a hunter (whom at the moment we only know as “hunter” or “glorious hunter”), looking into the disappearance of your sister after she gets bored of your wily hunting ways and storms back into the nearby town, convinced that there must be a better way to live.

For those who are less likely to place much value on storytelling and are more likely to rush through to the inevitable lewd scenes, this may not be a problem at all. Those however who are looking for a particularly gripping narrative alongside their desire for lewd scenes will unfortunately find themselves disappointed.

One of the first things I noticed about Knightly Passions’ story was its writing inconsistencies. A large swath of the game’s writing that I experienced suffered from what appeared to be a somewhat lackluster English localization, the game’s two language options being English and Russian.

While not enough of a problem to prevent me from completing my playthrough of roughly 3-ish hours, a lot of the word choices and sentence structures of the game felt oddly constructed.

Strangely enough this wasn’t always the case, with some scenes having well written prose with solid vocabulary. I found the juxtaposition between the well written scenes and the rest of the game (which tends to lean more towards the lackluster localization vibe), to be a bit jarring.

I would like to see FEYADA invest in bringing on a professional English language writer to spruce up the localization. In my opinion the barebones worldbuilding could use a little TLC as well, as it is relying a bit too much on your usual fantasy tropes (powerful witch living outside of town, corrupt city guardsmen, local government caring little for its people, etc.).

Knightly Passions’ gameplay is focused primarily on following quest chains obtained as you progress through the story. Deck-based combat and minigames are sprinkled in along the way in an attempt to provide a certain variety of experience in addition to your usual visual novel fare.

While not providing any specific innovation on the now ubiquitous deck-based combat mechanic, Knightly Passions’ combat is well designed, even if a bit too repetitive for my taste in its current state. If development resources are properly focused towards this end, I could see combat becoming a more significant highlight of the game in future releases.

There are hints at more complex character-building possibilities, IE: An inventory system, an equipment system for your character, a Blacksmith etc. but they are hardly utilized yet and thus don’t contribute much towards improving the game’s somewhat mediocre gameplay loop.

Without spoiling anything, there is a combat sequence involving a cave in the back half of Knightly Passions v0.4b that I found to be a bit tedious. The cave sequence felt more like it was attempting to stretch the total amount of available playtime rather than provide a more substantive experience for the player to enjoy.

Once you’ve advanced a bit beyond the game’s introduction, the first of the minigames you’ll encounter is an arm-wrestling game in the Tavern. Arm wrestling is carried out simply by mashing on arrow keys that flash at specific intervals, with the goal being to advance the “marker” to the right side of a traditional “strength meter” type bar.

Overall, these mechanics serve to add some well needed distractions to your usual “read and click choice” aspect of visual novels.

If there’s one thing that can be said about Knightly Passions, it’s that the production value in both its artistic direction and its sound design are where it shines the brightest. Alongside its clean and well-designed interface, during my playthrough I can say wholeheartedly that the sole driving force keeping me playing was the promise of unlocking of new areas, characters, and lewd scenes.

Likely the driving force behind why most people will download this game, Knightly Passions’ lewd scenes do not disappoint. All lewd scenes are animated and provide players with the opportunity of slowing them down or speeding them up at their leisure.

While the writing can at times be a distraction from rather than a benefit to the lewd scenes, Knightly Passions is gracious enough in allowing you to watch these scenes for as long as you’d like before choosing to advance on to the scene’s climax. Additionally, once you’ve unlocked a scene you are free to experience them again through the game’s gallery.

Accompanied by a beautiful soundtrack, Knightly Passions’ background music takes you lovingly by the hand as it welcomes you into its world. I was pleasantly surprised by how much I enjoyed listening to the game through my audiophile gear.

While I believe that the quality of the game’s BGM will show through on even average quality audio setups, I would recommend putting on your best pair of headphones (optionally accompanied by the Amp / DAC combo of your choice) to get the most of Knightly Passion’s BGM.

Similarly, I found the sound design to be on point, with CG events accentuated by well-placed SFX.

In conclusion, although accompanied by somewhat inconsistent writing and plot direction, Knightly Passions is a beautiful game that is a treat for both the eyes, the ears, and your erogenous zone of choice.

Have you played Knightly Passions? Let us know what your thoughts are in the comments, and be sure to join the LewdPixels Discord! 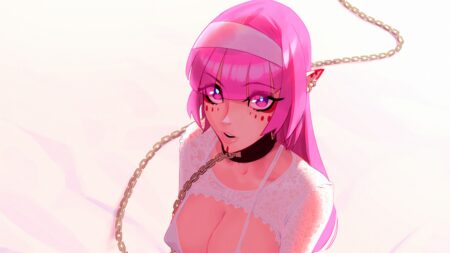 Once in a Lifetime — Finding a Beautiful Wife

Moms are sexy too – Top MILFs in lewd Games part 2

Wow, good analysis. Now I’m concerned about quality of our English translation in addition no other aspects too 😅