In a genre where larger than life characters are very common, it’s easy to find games far too unrealistic to follow. The characters often seem to have no flaws and face little to no challenges throughout the story. Unlike many games, Katawa Shoujo does a fantastic job of making a believable and compelling story. We play as a young Japanese student, Hisao Nikai and within the first few minutes of the game, he faces major adversity and his life as he knew it was taken from him. During the game we meet new characters in a school mostly filled by disabled students. Even though all the characters are seemingly riddled with imperfect bodies, they learn to overcome these problems and be as perfect as they can be. Not only is it refreshing to play such a unique game, it’s inspiring. Constantly the characters are making the best of life with the hand they are given.

Katawa Shoujo is a game far older than even the entire Western Adult Game industry we know of today. The full game was released in early 2012 and in some ways, it really stands up to many games from even as late as now. The story and the writing felt natural and humorous. It captured my interest and I came to really appreciate the girls we meet. Even if you chose not pursue a romantic relationship with certain characters, the gradual bonding between Hisao and them was very well done. On top of the engaging platonic relationships, the game offers five different love interests. The girls have largely differing personalities and provide a lot of variety to help you form the perfect play-through for yourself. There are even multiple endings with each of the girls which adds even more replay-ability to the game. The game really makes you feel like a part of the story. Hisao not only helps the girls better themselves as people, but the girls make Hisao a far better and more motivated person as well. I think that more often than not, it is crucial for games to build relationships this way. It made me feel like I had a purpose within the story and it helped immerse myself in the setting. It is clear to me that this game excelled the most in regards to its writing. The game is written maturely and tastefully but it still includes plenty of humor and banter between the characters that is not only evident in the dialogue, but also through the art.

The art is a very unique and the characters are all illustrated rather well. But the game could have done with many more poses and expressions for each character. After playing for a while, it becomes obvious that many of the same pictures are reused over and over throughout the story. In spite of this, the art is charming and I really appreciate the fact that the characters are drawn realistically. The girls all have a couple different outfits depending on the setting but again it feels limited. The game would have benefited from adding just a bit more variation in the art. It begins to feel lazy seeing so much of the same.

Many games forego adding music because of the costs and the time investment is too steep but Katawa Shoujo really illustrates why music can be such an important part of a visual novel (VN). Music, combined with the writing, as well as the art add a ton of value to scenes. The game has almost two hours of unique music and I really cannot overstate how much of a role it played in the story. During more poignant moments the music really adds to the tone and during more upbeat moments the music feels energetic and happy. I can really appreciate the extra effort that went into the music.

I feel that Katawa Shoujo is a VN that should be kept in mind for developers of new games. The game has many strengths and definitely some weaknesses that should be learned from. The game was really ambitious for its time and many areas lack polish. It’s evident that more content isn’t necessarily always better and I think this should be considered for any newer developers. That being said, the deep relationship building during the game is something I would love to see more VNs include. When I get to learn to love certain characters during the course of the game I feel so much more engaged with the story. Katawa Shoujo also demonstrates that great adult VNs can be more story focused but be just as interesting as ones more concentrated on the lewd parts.

When compared to contemporary VNs, it is pretty obvious to the eye that this game is much older. It lacks some of the quality of life features that I have come to love about Ren’Py. The choices you can make feel pretty generic and random. For example telling the nurse you maybe will consider exercising can put you on an entirely different path than if you said you definitely will exercise. The choices do not necessarily make much sense in a lot of circumstances and for that reason I had to use a walk-through to find every path. If a walk-through is needed to find all the content, I believe there were mistakes made by the developers. The game should have been more clear in regards to the decisions you get to make. For this reason amongst the others listed above, the level of production left a lot the be desired.

Looking back at this game, I certainly have a lot of respect for what their team accomplished and it is crazy to believe how old it is. This game is a fantastic one to introduce people newer to the adult game industry. Katawa Shoujo shows that adult VNs are an art and not simply porn which can be very easy for someone from an outside perspective to undeservedly categorize adult VNs into. When reading Katawa Shoujo, you get to see where the industry was 8 years ago and how much has changed, for better and sometimes for worse. I think it’s safe to say that in some ways Katawa Shoujo does things perfectly, but has many imperfections that are an aching reminder about this game’s age. 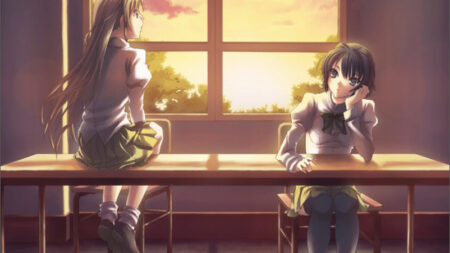 Buy me a CoffeeTwitter
PreviousReview

Did Somebody Say Vikings?