Choice in games is often an illusion. There is always a right way to play a game, with all other ways ending up with a reduced experience. Bad Teacher dresses up that illusory choice well, and still delivers plenty of content.

Adult games seem to fall into a few general groups; slow burns, repetitive grind, and quick gratification are three that cover most games. Bad Teacher falls into the latter category, at least initially, but there’s more to it than that.

The art in this game is bold without becoming experimental or otherwise overly ambitious. It works, and it’s sexy. There are some issues here and there, but nothing that’ll detract from the enjoyment of a scene.

The writing of the game is the same as the art. It’s bold, well done, and yet it doesn’t try to become something pretentious. It’s effective, maintains a consistent level of quality, and it gets the story told with very few errors. The writer also manages to inject some moments of humour into the proceedings.

The above two points make this a very good game for quick gratification – the sex scenes are frequent and diverse, even though most of them are optional. I do recommend playing with the Walkthrough mod, however. It takes out all the distracting thinking and lets the game do what it does best – entertain.

Getting back to the choice aspect of the game, however, you as the MC get to choose to be either a good guy or a bad guy. I’m reviewing this based on a largely balanced playthrough, choosing “Angel” or “Devil” actions based mainly on how much I like or dislike the character involved. I don’t know if I’m missing out on some content because of these choices, but as there’s so much content, I don’t feel as if I’m missing out at all. Maybe there will be some consequence to them in future updates, but I haven’t run into any so far.

As for the game’s coding and production values, they also seems to follow the ethos of the art and writing in that they’re solid, and pretty much get out of the way so that you can enjoy the scenes.

This is a great example of how to put together an effective adult game. Thought has been put into the composition of the images on screen so that the (largely unobtrusive) text box doesn’t have to be hidden often because it’s blocking the scene.

Everything about Bad Teacher is geared towards making sure the player’s experience is focused on the right parts of the game. This is an unashamed romp that allows you to choose what (and who) you want to do, and lets you get to the good bits with some of the characters very quickly, but that’s not all; some of the characters are on a slower burn (at least so far), but with all the entertainment and random sexual encounters, the game doesn’t leave you with blue balls.

The game is quick, fun, and satisfying. Sometimes that’s all you need. 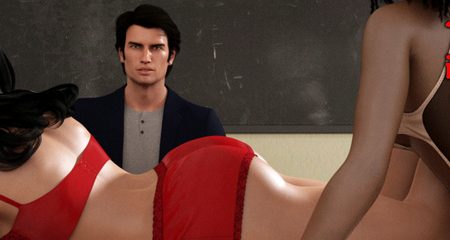 Light Of My Life - A Different Kind of Beautiful