Bad Memories is about returning to a home town that you as the MC (playable as male or female) thought you’d left for good. While the memories of the place have faded somewhat, the emotions haven’t.

While your return was well planned, with an apartment waiting for you and no intention of talking to the people who hurt you, nothing goes to plan. You end up with only one option, to move back to the home that is the source of the titular bad memories, only to find that things are very different from before.

The game is nicely put together in terms of art and user interface; there’s an option to turn the window behind the text off or on, and there’s also an option in certain scenes to switch to third-person view. The character designs aren’t in any special way distinctive from other games, but some of them are cute, while others are somewhat strangely proportioned, and not in an oversized way. There are some odd design decisions, however, in that the game plays like a standard visual novel, but has a few open-world aspects to it that are somewhat jarring. They add extra clicks to the experience but don’t seem to serve any other purpose because there’s no real point in diverging from the game’s story.

The writing is good, with few noticeable errors (mainly in the latest update), and the story has had a promising start. There are some really well told sequences of events, and some interesting characters, but saying too much would lead to spoilers.

This game has a complex tale, and with the added challenge of rendering for both female and male characters, I have a feeling that updates will be short or infrequent. It really has to be played in large doses, otherwise the player risks forgetting small details that may become important later.

The sexual scenes in the game are, at this stage, okay, but not great. There’s some scope for improvement there. That’s not to say that they’re badly done in terms of visuals and writing, however. They are sexy, and in some cases, they actually highlight something about the character involved. The improvement really needs to be in the eroticism and length of the scenes.

There’s a lot of good to be said about Bad Memories, but as to it being memorable? I think it has promise, and after a few more updates it will become so. For now, however, I feel the game hasn’t really gotten started enough to really stick in the memory; it’s like it’s still in the first act and I’m waiting for the finale of that before I can really get into it, but the unanswered questions and the various plot threads are, I feel, worth coming back for. 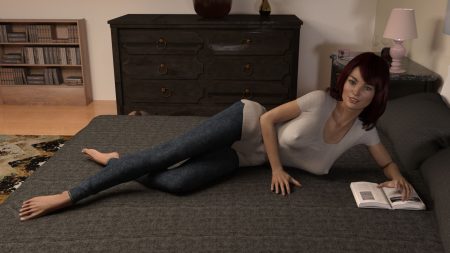 Healslut - Both Funny and Sexy!

Harsh review? I think it’s a bit generous. Here is it going on 8 months later and only 1 update which was minor. I had high expectations for this game which have fallen flat. Granted it’s been several weeks since I played, however I don’t recall the story going into any depth about the little sisters issues. Nor any details about the mothers issues, only that she takes meds. There are other things I’d like to see and have explained, but at the rate they are going, it will be a couple years before I get any answers.
I think it could just be another one of those games they put out to get some Patreon money coming in, then string folks along for as long as possible. I mean, heck, currently they get $1500 per month….

I find this review unnecessarily harsh with the game. To me, each of the main girls is really special and different from the same old models we always see on less than good games. The story is interesting and the relationship between the characters is well written.

Also, animations in this game are in fact qualitative and hella sexy (although your mileage may vary) and all can see that Recreation put a lot of effort and love into his work. Is it the best game out there? No (although definitely one of my favorites). But is it memorable? Hell yeah!

I understand that reviews can only be subjective, but I don’t think 3.2/5 is doing the game justice.

One last point, I think you should put the version of the game in your review, especially when using temporal arguments like “at this stage”.

Thanks for the feedback and for sharing your thoughts.

For reference, the version number is next to the rating at the bottom. “Bad Memories Review – for v0.5.1”

“The character designs aren’t in any special way distinctive from other games, but some of them are cute, while others are somewhat strangely proportioned, and not in an oversized way.”

“The sexual scenes in the game are, at this stage, okay, but not great.”

If that is supposed to be a joke, then it’s a bad one…

How can the visuals here be worse than in Bad Teacher? The Dev here uses actual skin textures and delivers realistic animations, sorry this can’t be a serious review.