A New Dawn by WhiteRaven is an Adult RPG game that focuses on the theme of corruption, while also delivering on many other fantasies and scenarios. The game follows Victoria, a young virgin and daughter of a powerful duke. Her home, and consequentially her land, was invaded by an evil force summoned from ancient magic that now reigns havoc on her once peaceful and innocent world. During the invasion, she is separated from her family. Now, on her own for the first time in her life, she’s tasked with reuniting with her family, while also conforming to her new lifestyle in poverty. As you play, you will watch Victoria transform from an innocent and prudish daughter to a common whore catering to your tastes. With various bad endings and branching options, her path awaits your guidance.

Even after it’s worn down, missing batteries, and sometimes broken, the toy still captures the kid’s attention just like this game captures mine

With the newest version of A New Dawn published recently, I decided to revisit this title to see what’s new. I’ve been following this game since version 1.0, returning every few updates to check out what’s new. The game feels to me like that one toy every kid had while growing up and never wanted to get rid of. Even after it’s worn down, missing batteries, and sometimes broken, the toy still captures the kid’s attention just like this game captures mine. While it’s been fun returning to this game periodically, it’s almost a requirement to keep a save file on hand. There is a lot of content and story in this game.

So what gears and mechanisms make this toy work? Well, the developer is using the RPG Maker engine for this game, while providing adult content through CG renders and overlays. When reading the developer’s Patreon, I noticed them explicitly stating their approach to RPG Maker, the design of the game, and what kind of game they’re aiming for. For instance, the developer says that they will not make use of the engines turn-based combat system because it is irrelevant to the game’s core design and will not fit. This, to me, is a sign of a developer who knows his audience and the stigma surrounding RPG Maker. Too often, turn-based combat is inserted in places it just doesn’t belong. Just like a kids toy being shoved into a sewage pipe, real or metaphorical.

Moving on; the gameplay and production of the game is fair. There are long-lasting periods of the game that drag on far too long. I’ve found myself becoming stuck on many occasions and, presently, there is more work that needs to be done. The developer has already combated some of these issues in later versions, but I think the early game should be revisited for new players. One standout feature for me is the design around the protagonist’s dreams and how they coincide with corruption and the actions I make throughout a playthrough. It gave me opportunities to perform specific activities during the day, which caused the protagonist to have more and more suggestive dreams during the night. To me, these dreams grant purpose and depth to otherwise insignificant actions performed during the day.

There Victoria was, standing in the center of the town. With little to her name and no direction, she wandered around aimlessly, looking for any clues to how she will move forward. Suddenly, Victoria hears voices coming from an entrance in a stone wall that piques her interest. With nothing to lose, she investigates the noise. Unprepared for what lies ahead, she peaks around the dirty and moist hole in the wall, revealing the source of the voices. She gasps in horror, seeing a woman on her knee’s relentlessly performing fellatio on a large, disgusting man in the shadows. Victoria, astonished by the scene in front of her, is frozen in place with her eyes fixated on the couple. Exploration and discovery are two elements of the game I enjoyed the most. This excerpt is an authentic experience I had in-game, and only scratches the surface of what else the game offers.

Of course, the developer has to visualize this pivoting moment of Victoria being exposed to such immoral behavior. Visuals in A New Dawn are a mixture of render overlays and fully rendered scenes mixed to aid the player’s imagination. The developer conveys brief moments of action by overlaying a transparent render onto the screen. For example, something like flashing a character would be an overlay, while intercourse is spread out across multiple fully rendered scenes. I think this approach suits the game well. The quality of the renders is fitting for these uses. It’s not ultra-HD with elaborate lighting fixtures and setups. They’re straight to the point and what lacks in detail is made up by how many renders the game provides.

Renders aren’t the only graphics in this game though. RPG Maker comes with a default asset pack containing sprites, character portraits, tilesets, and much more for a developer to use. They’re high quality but extremely overused. A New Dawn makes significant use of these default assets, which really weighs down the production and visual quality of the game. Renders and pixelated assets don’t often mix that well and it doesn’t seem like the developer has taken any effort to remedy this mixture. So you’re left with switching between fully rendered scenes, stock assets, and overlays. This ruins the entire visual flow and doesn’t make the game feel like a package deal.

If your pet peeve is a story written in non-native English, this game might not be for you. I can stomach grammatical errors without having an impulsive urge to lash out at the developer, but I know not everyone feels the same. The quality of the writing is enough to convey the story and the emotions are clear enough for consumption, but that’s it. I do hope in the future the developer reaches out for some help with their writing skills or considers a native English editor. Putting the quality aside for a minute, I’ve still enjoyed following the story so far; it’s right up my alley.

Just like any toy you play with, you will inevitably have to put it away to revisit another time. A New Dawn is taking strides in the right direction with their goals listed on their Patreon page and is a toy I’ll always pick back up and play with in the future. It may be a little broken and battered, but a few stitches can go a long way. With it still being in beta, the game has many opportunities for improvement. The developer has a lot of unique concepts that aren’t implemented, which will significantly improve the current disposition of the game. All in all, if you’re a fan of corruption games, then I’d strongly recommend giving this game a playthrough. 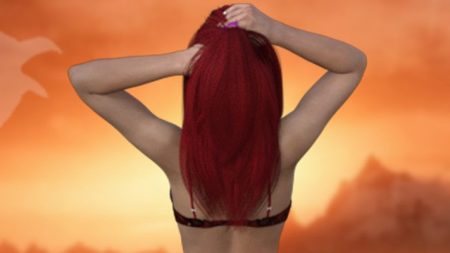 Is Third Crisis setting a precedent for upcoming Adult RPGs?

How "Future Fragments" Is Taking The Adult Gaming Industry By Storm

A New Dawn is definitely an enjoyable play! I’m not a fan of 3d renders, generally speaking, but AND has enough fetishes that I enjoy – and a tasty redheaded heroine – so I make an exception. I agree that a native English editor would definitely boost the production value of the game, but compared to so many other translated projects, I don’t think that the flaws reduce the eroticism of the game.

If there’s one point where I wish the game would develop, it would be the expansion of Victoria’s wardrobe. Kisekae has always been a favorite aspect of adult gaming for me, and I bet the Duke’s daughter would look great in more outfits in the early and mid-game. But, that would definitely increase the size of an already gigabyte+ game, so it might be a bit much to ask.