At first glance, Futa Fix Dick Dine and Dash seems like a run of the mill, raunchy visual novel, albeit one geared towards folks who are futanari fans. However, any amount of consideration beyond a passive look reveals the surprising level of time, talent, and care that went into this title. It’s a shame that a handful of bugs and a limited amount of content holds this game back, but it does inspire confidence in the developer/publisher, Kupaa Studios, and makes me excited for their upcoming visual novels.

The women available for romance in Futa Fix include Emily’s domineering boss, her party girl coworker, her sporty coworker who’s also secretly packing, an elder sister type who makes a living as a lewd streamer, a mysterious bartender, a closet exhibitionist/masochist, and — eventually — an unknowable cosmic force that takes the shape of a beautiful lady who just happens to have cat ears.

However, it’s in Futa Fix’s execution that the title really makes it tower over most of its contemporaries.

Kuppa Studios went above and beyond when crafting this game. There’s an impressive amount of voice acting that goes a long way towards making each character feel unique, and a player feel like they’re doing more than just clicking through PNG and GIF files. Speaking of, there’s a ton of stellar animation in this game! Every character gets one or two animated scenes on their route and, while they are looped animations, they’re much better than the vast majority of animated sequences occasionally found in this genre of games.

It’s a shame, then, that a few technical issues and a quality over quantity philosophy keep Futa Fix Dick Dine and Dash from being as great as it could be.

I encountered a handful of bugs in my playthrough that brought down the experience. Lag between text and audio was frustrating and made it feel like I had to sit and wait to experience one of my favorite elements of the game. Moreover, various one-off graphical glitches proved to be an irregular distraction. The most egregious example of this that I encountered was a character’s facial features shrinking to half their size and moving off-center from the model. All of the little errors like this righted themselves pretty quickly, but they all added up to an annoyance that’s just a little too big to go unmentioned.

I should also note that a series of patches have come out to address these bugs, but little hiccups were common enough during replays that mentioning them is still pertinent to this review.

Futa Fix’s greatest flaw, though, is that it’s too short. You can get through the entirety of the game in about three hours and, while many of the CGs are good enough to merit repeat viewings, that just doesn’t quite feel like enough content for a game currently running twelve dollars on Steam. For as good a time as I had with this title, my only thought as credits began to roll was, “that’s it?”

I understand the value in leaving your audience wanting more, especially when the performer here is a relatively new indie team with several other projects in the works, but Futa Fix’s ending felt like more of a tease than a climax. This may be backhanded, but Kupaa Studios really did make the best parts of this game so good, that I was left frustrated by its abrupt ending, and can now only wait for them to release more games on this level, or roll out their recently announced DLC.

My biggest takeaway from Futa Fix Dick Dine and Dash, though, is that I hope it does begin a trend of higher quality adult games. This title isn’t groundbreaking or particularly original, but it traverses these well-trodden paths better than most visual novels to come before it. I have high hopes for Kupaa Studios upcoming games, Bad Night and Sequoia State Vol 2, but more than anything I hope that Futa Fix inspires other adult devs to add more polish to their titles and not be afraid to base their games around specific kinks.

Futa Fix was one of Steam’s best selling games in December 2020 and this popularity is more than deserved. This level of quality and popularity really does make it feel like this game could be a tipping point in the adult games industry, and I encourage everyone even vaguely interested in this title to give it a chance. If you’ve given this game a try already, please let us know what you think of it in the comments, and be sure to check out the other VN reviews here on LewdPixels. 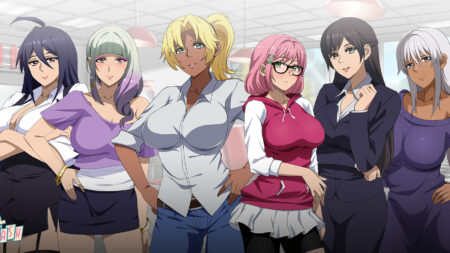 Sanguine Rose - Patience is a virtue