Trouble in Paradise, by Syko134, is a fun adult visual novel taking place in Paradise City, where you and your best friend move for higher education. The main character finds out something about him and his best friend while attending the school that changes their path in life.

The style of Trouble in Paradise is very anime from the models to the character expressions and emotes, and is consistent throughout. You can expect shots with embarrassed characters to blush. It definitely has a 2D style to it. The diversity in the characters, mostly girls, is also fantastic with each character having distinct looks.

Many of the sex scenes have animations in them. They are well done but there are a few that only show (or mostly show) the face during sexual activity. I found myself wanting a bit more depth in those shots.

The story-line is unique where the primary characters, the MC Alex, and Iris (the best friend), are on a journey of self discovery when they find out they have an extremely unique genetic condition that gives them some impressive abilities (many of which are yet undiscovered in the game). On top of that, now that they are living together alone, they realize their love with each other and develop it into a secretive relationship. The story has elements of a harem, where Iris really doesn’t mind if Alex sleeps around with other girls (although, she probably doesn’t know how many flings he really has). Aside from the unique plot, the story repeats some but not many of the popular tropes. For example, there are several accidental shower events where the MC or Iris stumble upon the other while naked or other embarrassing situations. However, the writing and the shots make these believable in the story context. It doesn’t ever feel forced.

The other characters in the game also have depth to them. Several of them are going through their own struggles and Alex and Iris are willing helpers and good friends (Alex is always willing to help a pretty girl in need).

I really enjoyed Trouble in Paradise and am excited for future drops. It’s fun, refreshing and unique enough to distinguish itself from other visual novels. I enjoyed the slow development of Alex and Iris’ relationship. I almost would have preferred it go a bit slower once the two realize their mutual love, but nevertheless it’s an acceptable pace.

Have you played Trouble in Paradise yet? What did you think? Comment below and let us know what you enjoyed and what you didn’t. 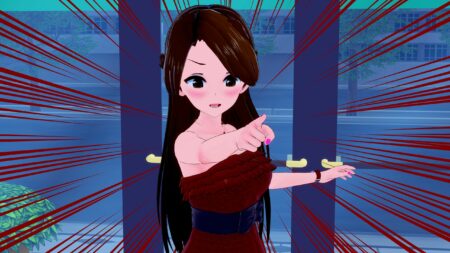