Adult visual novels that take place in various settings. Most take place in the modern world we’re familiar with, but the backdrop of these games can go all over the place. Some might happen in Medieval Europe while others happen in an alternate universe where elves live in forests and orcs threaten the land. Others still might happen in a cyberpunk setting where everything is dire.

However, I’m confident that only a few can hold a candle to having a world as unique’s as Euryale’s Gambit. This game by deepglugs is one of the most interesting AVNs I’ve played this year and holds the potential to become one of the most fascinating games around.

The game centers around the titular character, Euryale, a succubus that has lived eons. She went back in time to 1858 — two years before the start of the American Civil War — in order to change the course of history and prevent the people she cares about in 2019 to suffer a terrible fate. However, she used most of her lust energy during her travels and had to get some of her energy from an unfortunate bounty hunter.

She reunites with Spoons, a slavery abolitionist and her former lover. After it was clear that they were going to abolish slavery together, they moved to Townsville, a cheekily named town where the game’s events are set. Is it the town where a certain scientist in the future will accidentally spill Chemical X to an unassuming concoction of what is going to be a perfect little girl? Who knows, really.

They were successful the first couple of times, but they eventually hit a roadblock when Euryale was stomped at Townsville’s Cathedral by Igret, the succubus queen. It turns out that she’s more involved in American society than previously expected and seems to know something about Euryale’s past.

She managed to get back on her feet with the help of Spoons, Ceraphina the rogue angel, and a couple of the slaves they freed. She soon got back on her feet and raided another plantation, but there is a nasty surprise waiting for her there.

Euryale’s Gambit has a lot of potential, story-wise. It’s bringing a naughty twist to American history that makes you interested in the story while giving you the goods. However, there are writing inconsistencies that could raise an eyebrow or two. Echo, one of the slaves you freed that was trafficked from Nigeria, implied that Greek religion is a legitimate religion in his homeland. There are story elements that aren’t fully fleshed out, but future updates should sort out this issue.

The game is a straightforward AVN. There’s no unique mechanic set in place yet that will make the game stand out from its contemporaries. All you have to do at this moment is click and read through the story.

Some gamers may be put off by the lack of gameplay variety, but it seems like deepglugs is working on something nice to add a bit of variety. There are certain points in the game that show gamers placeholders of the fight system that will be installed in future versions of the game. This should alleviate any worries of monotony for the final product.

However, the promise of an exciting game mode doesn’t remove the fact that this game is as simple as it can be. Until future versions show otherwise, this aspect of the game will get a modest score.

The visuals of the game meet the standards we’ve come to expect out of AVNs in 2021. The characters are well-made; Euryale, in fact, is quite a looker of an MC. While she makes interesting expressions from time to time, she’s a beautiful character to build the game around.

The rest of the cast also looks nice, but it’s obvious that plenty of attention went to the supernatural members. Each being you encounter in the world stands out in their own way. Igret is alluring yet menacing, and the rest of the metahumans also exhibit a unique feel about them that will prevent you from mistaking one from the other.

The particle effects used also give the game a unique feel from the other AVNs I’ve seen. However, there are instances that the number of elements used in a frame affects the overall visuals negatively. I expect these elements to be fixed in future updates.

It’s the audio that I find the most issues with, however. The use of AI voice actors is a bold move in terms of game production, but it’s given a mixed bag so far. Euryale slurs most of the time while drunk, but she sounded convincing when she was angry or devastated. Cindy — one of the characters you meet in Townsville — is one of the more impressive efforts you can hear in the game. You can always mute the AI via the Preferences, but deepglugs is working to improve this aspect.

There are also mixing problems that you’ll encounter. There are times when the background music is louder than the dialogue, but those issues could be sorted out by adjusting the volume settings.

Euryale’s Gambit is promising to become one of the more intriguing AVNs you can play this year, but it doesn’t come without issues.

Some of its problems (the voice acting, in particular) may be deal-breaking for some. However, those who can look past its limitations will find an interesting story with equally mesmerizing sex scenes.

We can expect more from deepglugs as he looks to finish Euryale’s saga in Civil War America. 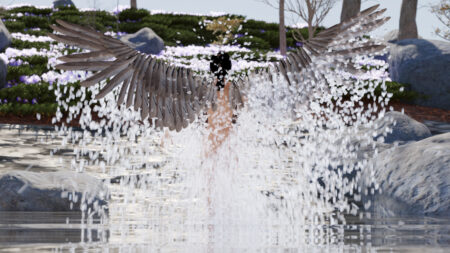 AVN lover for two years, casual gamer for longer. When not looking at rendered boobies, he listens to various artists on Spotify.

Staff Pick of the Week – Tame It!