There I was, embarking on a dangerous expedition toward the new and prosperous land of Vinland. Accompanied by some attractive and extremely fit Norse women, foreign slaves and merchants, and some other particularly interesting characters. I sail toward the horizon, bringing nothing with me but the buckler and family heirloom sword named “DickSlicer” on my back. Thirsty for adventure, and a particular redhead character, my journey for Vinland begins.

Vinland is an adult visual novel by Huitieme set in a world full of Vikings, unpronounceable Norse names, and sexy Norse women. The story takes place in 1008 CE. Greenland is celebrating the departure of a seafarers crew to Vinland, a new land promising numerous riches to those brave enough to conquer it. The expedition is led by Thorfinn Karlsefni and his wife, Eirik the Red’s children, and a couple of wealthy merchants. You play as a young peasant who initially came only to cheer on the heroes; however, through a turn of events, you find yourself enrolled in the crew and set sail with the seafarers.

Full of tasteful humor, stunning visuals, and compelling personalities. Vinland is shaping up to offer a very charming story about a peasant and his adventures with his crewmates on-board one of two vessels. As of this build, the game serves as a demo for what’s to come in forthcoming chapters; providing an introduction to the world, characters, and the quality of production to expect in the future. The demo was enough for me to get hooked and put this game on my watch list. The effort put toward visualizing a beautiful and vibrant world with character depth and suiting props immediately pays off when you land yourself on one of the two vessels. I was swept away at the scene compilation, lighting, and water detail used for the visuals.

I appreciate when developers release demos or shorts to illustrate what their project is, and the goals they have. It’s even more appreciated when the developers take the time to polish that demo and leave no room for misguidance or fallacious criticism. The developer has done a great job thus far on capturing that nordic atmosphere by offering a unique user interface, capturing beautiful scenery, and creating compelling personalities. One minute I was stunned by the amazing artwork, the next minute I found myself giggling like a schoolgirl at some corny jokes. This demo was a rollercoaster of experiences and emotions.

For those who are looking for an accurate and historical representation of Vikings and Norse mythology, this game doesn’t quite serve that purpose. Although some parallels are clearly drawn, the personalities of the characters heavily contrast any fantasy of it being real or historical. The Vikings in Vinland may look like these scruffy brute men, but that fantasy is immediately shattered with how fluffy and warm their dialogue is. I’m unsure whether the game will shift directions in later builds by giving the dialogue a more serious tone, or if it will continue in the direction it’s in with all of its humor and charming dialogue. I’m crossing my fingers that the developer steers his vessel onward in its current course because my journey so far has been amusing.

One element of the production I found the developer executed very well on is how relevant the character’s appearances are with their respective personalities. The main character reminds me of that kid in high school that was fun to be around and had a vibrant and contagious personality but was sort of a lost cause. The developer did an exceptional job of portraying that personality through the appearance of the main character. You will immediately make that connection during the first few minutes of playing the game. It’s uncanny, and it’s brilliant!

Vinland is still in its very early development stages, the demo only containing an hour of gameplay at most. I was disappointed with how little explicit content was in the demo, but I respect it if the developer wants to take their time with character development and story progression. This is a reasonable approach since once the cat is out of the bag, there’s no putting it back in. However, with all that being said, I’m really excited to see how this game pans out, and all the hilarity that will ensue in upcoming builds. 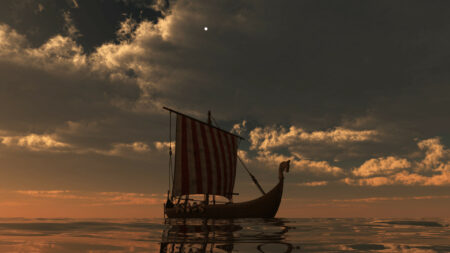 Powerslide Into The Panties Of Your Favorite Lewd Girls In Shady Lewd Kart.

Sounds like too early to judge the game yet