The Deluca Family is a game developed by HopesGaming. At first, when I have downloaded this game, I wasn’t expecting it to be anything like it is. I was just looking for a game with some good lewd scenes, I didn’t know what type of game this is, so I downloaded it and wanted to check it myself. I started playing it and I was hooked. I played and played, I loved the story so much that I can proudly say that its story is enough for anyone to play this game. Enough of that, I will try to describe how good of a game is DeLuca family in each aspect. Before that, let’s just see the overview of the game given by Hopes on his Patreon.

Although, VN mode is still isn’t available in the current version, the story+ free-roam mode seems to be pretty similar to that with just a small portion of free-roam elements. And as far as “Full-experience” mode is concerned, I tried playing it just for reviewing the game other than that, not a big fan of that model. It has a few contracts that I liked very much and a few seem to be just sub-par and overall, I understand why such a mode of gameplay exists and I respect Hopes and people who like it, but it is just not for me, maybe if it has visuals and a bit easier approach, I might like that gameplay but for now, I am not very much into it and it is ok, considering Hopes is providing different gameplay options to satisfy everyone’s likings and make the game playable for everyone. Something that other developers also have to keep in mind. And coming to the music in the game, we don’t have a lot of tracks but the music we have is pretty much tailored to fit the game theme. So, that’s just about it for gameplay, it’s ultimately the player’s choice whether they wanna go with the simple VN mode or the tedious “Full-experience” mode.

The art or the visuals of this game are just up to par with today’s standards, nothing over the top or out of this world, although sometimes HopesGaming makes really good renders maybe it is just the time constraints the developers face that force them not to spend more time on each render and make them as good as possible, but I hope render-quality of this game improves. The way this game portrays some fighting and shooting stuff is amazing, the camera angles are just perfect, so kudos for that. Well, coming to animations, there aren’t many as for now but I can see what we will be getting in the future when we will have more sex scenes, so although we have fewer animations, those are pretty good, and when we will get more sex scenes and to be precise, longer sex scenes (the sex scene we have in this update has got only one position and seemed a little short), I can say we will have good fun with them.

The story and plot of The DeLuca Family are top-notch and if you need one reason, just one to play this game, I would say it is the story and writing. The story of this game is super interesting and there is no way you won’t be sucked into the world of DeLucas if you play this game. The stories that make us want more and more of them and keep the reader engaged and captivated are pretty rare, especially in the AVNs, and DeLuca is one of them. All the love interests in the game have very good storylines and we will get to see their ups and downs, their highs and lows, and their past trauma. Along with an interesting story, the dialogue-writing of this game is really impressive, whether it is things happening in the story or is it the behavior of a character, it is always justifiable with something we’ve been told in the past like things always fall into the place.

And sometimes the writing touches even the levels of a professional writer, we get to see that in the “My name is Luna” event, where the writing and narration level goes insane, leaving the reader’s heart filled with emotions. Luna’s arc that we have in the game till now is one of the best character arcs in VNs, and there is a lot more to come to Luna so, it’s gonna be a great ride. I also love Isabel’s story, she is my favorite character in this game, although every other love interest is also very much likable, I favor Isabel of them all. The humor is also prevalent in the story and even the most serious of characters like serpents(Gottardo) and higher rank members are very humorous and this humor helps the game shift the tone quite a bit from a serious mafia story to a fun one. Some people often complain that sometimes the writing gets too cheesy, but I don’t really feel that way except a few times when it is overdone. So, in story writing, HopesGaming has done a really impressive job.

Overall, The DeLuca Family is a game that is loved by many, and people who haven’t tried it yet, should really do it, the game is free to the public, Hopes makes it available for everyone after few weeks of his Patreon release. Just like every other game, the Deluca family also has its flaws and shortcomings, but it is a game that I enjoy very much and one of the best games I have played in the AVN category. I hope HopesGaming gets all the support he needs to complete this game and I am very much looking forward to the upcoming releases.

So, have you played The DeLuca Family ? Please let us know your thoughts about it in the comments section. 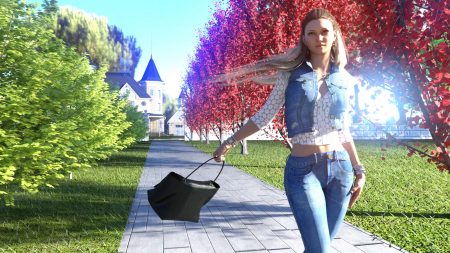 Adult Games are just playthings in bigger discussions, have a look at Apple and Epic fallout

DeLuca family is a top-notch game but the updates take FOREVER. in the end its not worth it to wait 1 year for a measly 30 minutes of gameplay. That’s why DrPinkcake will be the best adult visual novel developer. Consistent updates and keeps his community updated. Being A DIK and Quinn forever. ❤️💛

Every developer works at his/her own pace, it is ultimately the quality of the product that matters. Have a good day 🙂