This review may contain spoilers.

Ever wanted the epilogue of a game to be longer? Well, have I got the game for you because My New Family feels like it’s all epilogue, the happily ever after you don’t usually get to see much of. There are multiple reasons for this. The main one is how there’s little to no conflict throughout the story; this is not to say that everything is happiness and rainbows because there are multiple instances where characters are sad or angry. But, the issues they have to go and work through get fixed so fast or easily that these “problems” never actually create any tension; it’s as if you can see the plot armour.

The game has a total of 22 romantic interests to choose from on the current version, and that isn’t all of them yet. How do I know this? Because the main menu screen still has space left before it’s completely filled with girls, and you can’t see the house anymore.

You can play the game with a community made patch (like I did); this then introduces incest and gives a selection of characters to choose from, such as your mother, your sisters, their doctor, your cousin, your aunt, one of your sister’s best friends, your boss, your boss’s secretary, and in later episodes, your grandma, and even a nun.

Note: The developer of the game does not support the use of a community-made patch.

If you’ve played any games made with Honey Select, you’ll have seen these kinds of visuals before, and whether you like them or not, this specific game showcases very well one of the main reasons I don’t like Honey Select (at least the first one). And it’s the lighting and shadows. The lighting feels like it’s not bright enough, and the shadows are very flat and not as dark as they need to be; shadows can look the same inside and outside, for example.

Characters aren’t what I’d call original either; sure, there’s something for everyone, you probably get every type of girl here, yet their designs don’t really stand out. The way you’ll recognize them at the beginning is probably because of their clothes; each character has a few sets of clothes that they rotate between.

Another shortcoming of Honey Select that is pretty visible in this game is the draw distance; there’s not much of a horizon, especially at the beginning of the game, a fact that is actually addressed in the game with a couple of jokes. A couple of times (especially later in the game), you can actually see the horizon, but most of the things in the distance are very clearly flat and not tridimensional.

The writing doesn’t actually flow very well, and it’s enough to notice it. What I mean by this is that the game is too verbose; the writing feels the need to over-explain quite often. This sometimes happens to the point of getting in the way of the story, making it hard to understand why something is happening, or someone is feeling the way they are. There is, for example, a point in the story where the grandmother asks the MC to do something that makes him and the rest of the family feel a certain way, that to this day, I don’t understand. Maybe it wasn’t properly explained, or maybe it was something else; whatever the reason, it’s clearly a big deal in the story. Another example of this issue is the lack of synonyms; the words delicious and wonderful start to lose meaning after being used so much. Also, saying “After you told them everything” every time the MC tells a character something the player already knows is unnecessary, fading to black can just as well signify the passage of time.

The crazy thing, though, is that even when things aren’t properly explained, the game still has exposition dumps here and there, things that could have worked better if they had been shown instead of a character just explaining it. Maybe if it were two characters coming to a conclusion together instead of one just monologuing the whole thing, it would be easier to digest.

This game won’t make you choose between two of the characters you love; in fact, it may punish you if you don’t pursue every girl you can. Not choosing to go out with a girl or having not accepted the advances of a girl might make the MC not leave the house, and that in turn leads to him not meeting a girl on the street and not ever seeing that scene with a character that you did choose to pursue. It wasn’t until I started a new playthrough for this review that I saw some scenes with a character I was supposedly going out with, just because I ignored another character at the beginning of the game.

Sex scenes also get very “samey” after a while; they feel like they follow a formula. Also, for a game that is all about romance, there’s a distinct lack of cuddles after sex (which is, in my book, criminal at this point).

But, if you can, and allow yourself to suspend your disbelief from how easy everything seems, especially to the MC, and see past all the issues, letting the characters shine for what they are, you’ll get a story with a focus on romance, heart, emotional moments, and a game that even when it slows down and not much is happening is just a nice place to be in. It’s a delightful experience, especially when you have in mind that the game knows exactly what it is and isn’t trying to be anything else. This is a game that is perfect for playing after having your house burn down and having to choose who to save between the two girls you are in love with. After seeing another game kill off a character you love, it’s the perfect soft and cuddly metaphorical pillow to rest. This game is so long that after you’ve finished all the updates to whichever other game you’re playing, this one is probably still going to have content waiting for you with open arms.

It may seem like I’m being too critical about this game, but that’s because I’m actually a bit disappointed about the direction the latest versions have gone. When I first played this game, I fell in love with Sandra so fast; she was so nice from the beginning and seeing that feeling that the beginning of the game captures never achieved again was disappointing. I thought maybe I was in a different place when I first tried the game, but after playing it again for this review, that feeling came back at the start of the game. The potential’s still there, but it just feels like it wasn’t properly exploited.

The game is 2 years old now; the anniversary was yesterday (31st of August), and this is one of the first Adult Games I ever played, so it has a special place in my heart, after all, if it wasn’t for this game I may not be writing this now. And it’s from that place of love that I write this; I’m not trying to “shit on the game”, but, sadly, I went from being excited about new updates to leaving the game for later. This review also took a long time to write for that exact reason.

What are your thoughts on the game? Have you played it? Or maybe you were there two years ago when it first came out, let us know and leave your thoughts in the comments! Oh, and happy 2nd anniversary, My New Family! 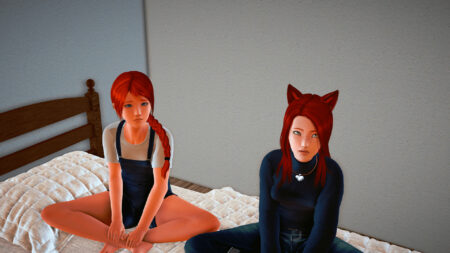 Staff Pick of the Week – Tame It!

Interesting review, the game has flow but for me at least it’s like a safe space, whenever i’m on a bad mood i play it and all the bad feelings goes away. I don’t know how to explain it and the girls have all their unique story and you care for them (in theory)

Most of those issues were solved pretty well with his next game (My new Memories) is a vastly superior game both visually and in terms of writing imho.

That said, I feel there is a niche in this world of VN for feel good stories without much drama and were you can just relax and pass a few days hanging out with people you know…

Totally agree with the review, it’s such a good game, but the flow get more and more drown out with each side girl added.
I guess now the dev has released his new game, he may wrap things up with My New Family and learn from his mistakes.
Still, if you like feel good story, it’s a great game <3