The term MILF gets thrown out a lot these days, so much so that the currency of the label is almost devalued. Enter Nicole Heavens. Is there any better description for this bombshell of a woman than Mom I’d like to Fuck? Her introduction to the audience leaves zero doubt. In an extremely memorable bathroom scene where Nicole intimately pleasures herself, the protagonist realizes his carnal feelings for his girlfriend’s mother the same time as the rest of us. We are left with a profound longing for the graceful curves on her body. Watching her from a distance will no longer suffice. Thankfully, OrbOrigin allows us to pursue this woman in this impressive project.

Many adult visual novels have no narrative to speak of, and many others come saddled with a convenient plot that permits the characters to interact and develop sexual relations with one other quickly. A rather popular premise is for a father figure to pass away, forcing the female characters (no one has a brother apparently) to become emotionally reliant on the protagonist. Even if these games can be enjoyable, they lack agency. In A Mother’s Love, the conditions under which sexual encounters happen are more purposeful because of the context.

Nicole doesn’t want you (MC) to date her daughter, Chloe, anymore because she considers you to be a negative influence. She tries to bribe you into leaving the relationship with monetary gifts. However, her suspicions about you are confirmed when you ask if she can strip instead. Due to the subjective nature of your contract, you’re allowed to constantly push the boundaries and request lewder actions from Nicole in every ‘payment’. Eventually, the lines between you ‘forcing her into sexual acts versus her desiring them’ start to blur. This process isn’t just a by-product of Stockholm syndrome and mind corruption. The nuances in this game allow you to pick between treating Nicole like a human being or a toy. You can see a visible change in her facial expressions the second you choose to stop being an asshole.

Her smile, her touch, her movements ALL feel real

As the primary love interest of the main character, Nicole bears the burden of having to carry large chunks of the plot. I’m happy to report that she’s up to the task. Nicole Heavens is what writers call fleshed out. She can be timid, yet resilient. Weak, but forceful. Stubborn, and still willing. She represents the complex nature of actual people. Her concern for her daughter’s well-being is real. Her self-consciousness after years of emotional and physical neglect is real. Her smile, her touch, her movements ALL feel real. A story cannot be engaging without compelling characters. Nicole delivers. Although, the other female characters (namely Chloe and Marilyn) mainly serve to fill the void every time Nicole is out of sight, they remain interesting in their own right.

Another female character, the MC’s mother, exists solely as a supportive parent, just like the father; it’s ridiculous how foreign this concept is in this genre. I don’t have much to add about the male characters, except that they all have their own wrinkles in the story as well. For example, Chloe’s father, John, is extremely sexist and a poor excuse of a husband, but actually happens to care quite a bit about his daughter.

So the characters are great and the story packs a punch. What about the writing itself? Well…. sometimes it can be hit or miss. The grammar isn’t always there, and the lack of punctuation occasionally deflates the dialogue. Having someone proof-read the script would greatly add to the in-game immersion.

Renders are crisp, although sometimes under-exposed. The use of layered images is clear if you’re paying attention to it, but being a developer myself, I have sympathy for this tactic especially if your workstation doesn’t have the graphics horsepower necessary for certain scenes. Characters are fairly attractive, though it’s evident that most of the attention to design was given to Nicole. That’s fine by me since she and the MC are the central figures of the game.

The sex scenes are well done in my opinion. Some people may complain about the lack of animations, but once again, that just may be a graphical limitation. The looped images work very nicely as a substitute. A lot of games, including ones with full animations, suffer from an inability to properly simulate poses for sex scenes. Robotic repetitions don’t do much for me. Here, the poses are organic, the facial expressions tell a story, and the dialogue is complementary.

Nitpicks: Do I wish the UI was more visually appealing? Sure. What about showing the MC’s face a little bit more? Yes. Surely high school is more than just history class, so would I have liked to see other classes/teachers at least be acknowledged? Kinda. What about music? MOARRR.

My feelings about Nicole and the game can be summed up by a famous lyric: I’ve had you so many times, but somehow I want more. Nicole is the type of woman you want to be a better person for. There’s no higher compliment I can give to a character. Although the writing can be rough at times, the story is sound and the characters are so compelling, that I find myself eagerly awaiting every new update.

Let me know how you feel about the game 🙂 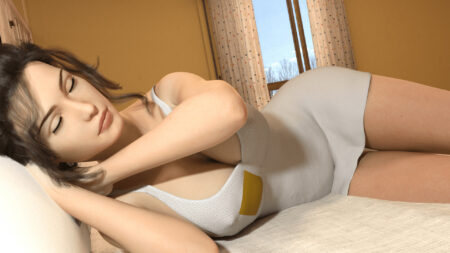 I started learning to code and render in the year 2020. What a noob, right? I'm the developer of the adult vn 'The Changing Season'. My long term plans involve medical school and hopefully a published book or two.

I like this review and I agree most of the points