When this game started out, I was hooked. I liked the story, the background, and the characters. There were a few repetitive actions in there, but nothing to really cause a headache. Since then, the story has grown in a way that has kept me looking forward to new updates, and even though not much else of the game is ground-breaking, it’s good to see a game with a decent story that keeps on growing.

The thing about this game in recent updates is the lack of choice and player agency, so this has grown into a more of a kinetic novel than an actual game. There are some typos, and some of them are quite amusing, like when mid-evil is used rather than medieval, but those are starting to fade as the dev is either getting some help, or is improving on their own. The latest update does use “cloths” instead of “clothes” at one point. The writing would get a much higher score if these issues were ironed out.

53X Homecoming starts with you, the MC, in a coma after an accident. You’ve been away from home in a boarding school for some time, but when you wake up you return to your family.

The art isn’t ground-breaking, but the characters are attractive, and there’s little in terms of clipping or odd posing to detract from immersion into the game. There are a few issues with clothing fits that should be fixed, and more than a few dimly lit scenes that could be done a lot better. I haven’t seen much in terms of the dev improving these things over time, which is somewhat disappointing.

The story, despite the typos, is well written enough to keep the player (or rather, reader) interested, and the gameplay is blessedly free of distracting minigames or anything else. This is simply a good story without too many things detracting from that solid base. It’s also a story that makes the MC seem like a master of almost everything he touches, which is good to see. This is not an MC that wonders whether an NPC likes him or not. He knows what he’s doing, and does it.

Overall, this game could be a fantastic purely kinetic novel. All it needs is some more care given to the quality of the art, more consistent lighting, and some better proofreading / editing. With that, this game would be an almost cinematic experience. I hope the dev continues with the game, and I’m looking forward to seeing what happens next in the story.

Have you played 53X Homecoming? If so, what did you think? Let us know in the comments! 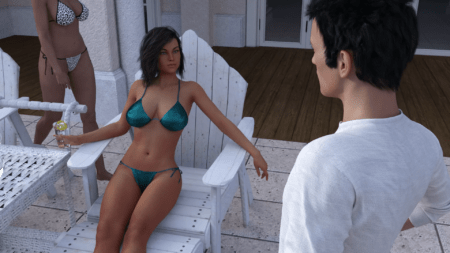